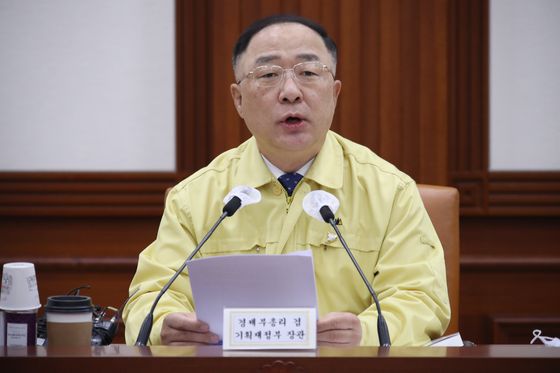 Finance Minister Hong Nam-ki announces a plan to tax profits on stock investment starting 2023 during a meeting at the government complex in Seoul on Thursday. [YONHAP]


The government will lower a transaction tax for the stock exchanges and institute a financial investment profit tax in 2022.


Its proposal is to tax annual net profits exceeding 20 million won ($16,500) made from investments in stocks and other financial instruments, which could affect many retail investors.

Currently they are taxed on profits only if they own at least 1 billion won worth of a single stock.

The transaction tax will be lowered from 0.25 percent to 0.15 percent from 2022 to 2023. The government expects that to encourage more retail investors to participate in the stock market.

The taxes will be collected starting in 2023.

While for local stocks, profits under 20 million won will be exempted, the exemption shrinks to 2.5 million won for investments in overseas stocks, unlisted stocks, bonds and derivatives.

The new tax is expected to raise 2.1 trillion won in 2023. The lowering of the transaction tax will cost the government 1.9 trillion won that year.

The new tax is expected to affect the top 5 percent of stock investors, estimated to number 300,000. The lowering of the transaction tax will benefit the remaining 5.7 million.

“Recently there have been rapid changes in the financial markets including the emergence of new financial products,” Finance Minister Hong Nam-ki said during a government meeting on Thursday. “We are pursuing reforms on financial taxation to back up innovation in the financial industry.”
The government said it will finalize its plan next month when announcing other tax reforms, which may include taxing profits made from cryptocurrency investments.

Taxing profits on stock investments has long been discussed, including by the National Assembly’s Strategy and Finance Committee in February.

Korea’s taxing of financial investments is considered outdated. It is the only country among advanced economies not to tax profits on stock investments.

Other countries such as the United States, Britain, Germany, France and Italy tax investors on the profits made in the stock market.

In 1999, Japan abolished its transaction tax and started taxing profits.

According to the Finance Ministry, a wide range of financial products have been exempted from tax payments, which isn't fair to people taxed on other kinds of labor or commercial activity.

Additionally, some see it as a tax dodge by the wealthiest Koreans.

The government took its first step toward changing its tax on stock investment last May.

“The government increased liquidity in the market [by lowering interest rates] yet they are blocking every investment avenue, whether it is in stocks or in real estate,” said a small investor who requested anonymity. “I just don’t understand.”

The government has also been spending heavily since the coronavirus pandemic hit, and tax collections have been shrinking.

In the first four months of this year, the fiscal deficit amounted to 43.3 trillion won, which was an all-time record and 67 percent higher than a year earlier. Spending between January and April grew 6.6 percent to 209.7 trillion won. Tax collections shrunk 2.6 percent year-on-year to 166.3 trillion won.

The Finance Ministry argued that the purpose of the tax on stock investment is to improve and modernize Korea's tax system and bring it into line with other advanced economies.