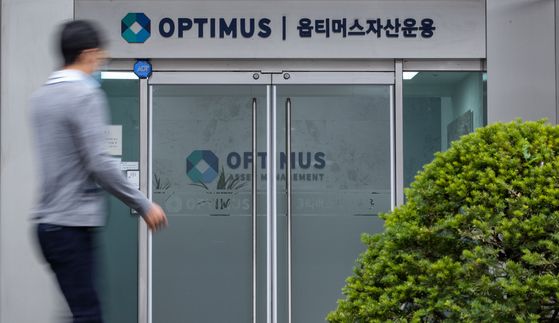 The sudden freezing of redemptions has come in a rapid-fire manner over the course of a few days, with the prosecutors raiding the firm's headquarters, brokers and customers filing law suits, allegations of fraud flying and the company's website shut down.

On Thursday, Optimus sent a notice to one of its brokers that it could not return customer investments in Creator Fund 27 and Creator 28 upon maturity. The products sold had a duration of less than one year, at the end of which principal and gains were to be returned.

Both funds had scheduled end dates of June 26.

NH Investment & Securities said that 22.5 billion won of its customer funds were invested in these products.

This is the third time the private equity firm has failed to meet a scheduled redemption, with six funds in total affected.

On June 18, Optimus sent notice to NH that it was unable to honor its obligations regarding Optimus Creator 15 and Creator 16. The same day, Korea Investment & Securities was told that Optimus Hermes 1 redemptions would not be effected on time.

In the case of Korea Investment & Securities, the broker said its customers have 12 billion won invested in Optimus funds which mature by next January.

NH sued Optimus Monday claiming fraud, saying that the asset manager fabricated depository statements to deceive investors. The private equity firm reportedly purchased risky assets, such as property and private bonds, even though its objectives were to be 95 percent investment in accounts receivable of state-run companies.

The prosecution raided the offices of Optimus in Samseong-district, central Seoul, Wednesday. In total, it issued seizure warrants for 14 locations, including companies, brokerage firms and the trust bank for Optimus. Key figures, including the head of the private equity fund, are being prohibited from traveling.

“After the FSC lowered the qualifications to form a PEF in 2015, something like the Optimus Fund scandal was just waiting to happen. It will take years for the FSS to investigate all 10,000 firms when there’s only five teams and 32 staff responsible for investigating such cases,” said the labor union.