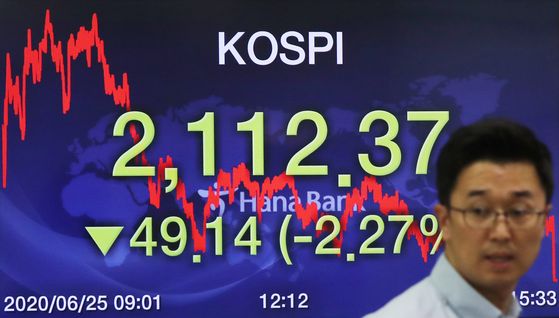 An employee stands in front of the screen with final Kospi at the dealing room in Hana Bank, Jung-district, central Seoul, Thursday. [YONHAP]


Stocks tumbled more than 2 percent Thursday as new cases of the coronavirus surged, dimming investors' hopes for a quick global economic recovery, analysts said. The won fell against the dollar.

The index opened lower after U.S. stocks plunged due to an alarming increase in new Covid-19 infections in the country.

The World Health Organization said it expects the number of global Covid-19 cases to touch 10 million next week, with new daily cases in the United States surging to nearly 36,000 in the latest tally, close to the record high of 36,426 in late April.

"Renewed worries over the spread of Covid-19 infections weighed down the market," Lee Won, an analyst at Bookook Securities, said. "A surge in new Covid-19 cases is also affecting the market negatively as the prospect of a global economic recovery is being adjusted."

Bio shares were also bearish. Pharmaceutical firm Samsung BioLogics was down 0.49 percent to end at 815,000 won, and another bio firm Celltrion lost 0.94 percent to 316,000 won.