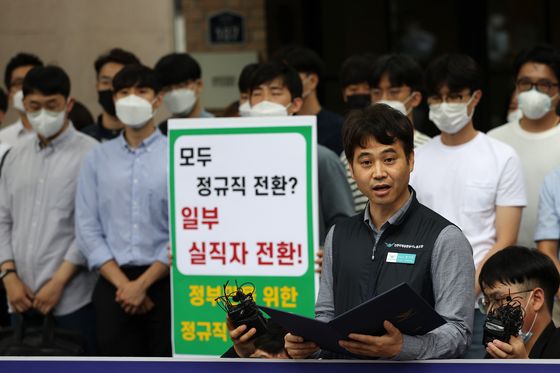 
The Incheon International Airport Corporation’s labor union added its voice to the growing criticism of the state-run corporation's announcement that it will offer standard employment contracts to subcontracted security guards.


The labor union, made up of regular employees of the state-run corporation, held a press conference in front of the Blue House in central Seoul on Friday, accusing the corporation of “causing extreme confusion and conflict” for announcing the “unilateral decision.”

The labor union argues that the airport corporation and the union had agreed that security guards would be made standard employees of airport subsidiaries first, and then possibly offered employment at the airport corporation if related legislation is passed. Instead, the corporation on Sunday announced that it would offer all 1,902 subcontracted security guards standard employment, although it has since stepped back from that promise.

“The airport corporation is making young people running towards their dream feel a sense of loss through injustice and reverse discrimination,” said Jang Ki-ho, the head of the labor union.


The airport corporation maintains that it did discuss the plan with the union.

Criticism of the corporation's plan has gone well beyond the labor union.

The corporation on Thursday clarified that security guards who started work before President Moon Jae-in’s pledge to upgrade contract workers at state-run companies on May 12, 2017, will have to undergo tests to upgrade their employment status. Those who started working after Moon’s promise will have to undergo a public recruiting process, including an application, tests and interview.


“Being a security guard isn’t something a part-timer can do," Lee added. "It’s a special task that requires two months of training without payment. They need to pass a test authorized by the Ministry of Land, Infrastructure and Transport.”


A petition posted on the Blue House’s online public feedback system on Monday, demanding a halt to the upgrading of irregular workers to public company payrolls, had been signed by more than 233,000 people as of 6 p.m. on Thursday. Having received more than 200,000 signatures within 30 days, the Blue House is obligated to reply to the petition.

The petition described the airport corporation’s recent decision as “a real shock,” questioning the unequal treatment between those who spent time and money studying to enter the corporation and those who just applied for a temporary job.

On Thursday, Kim Won-hyeong, head of a separate labor union for airport security guards, said in a CBS radio news show that the airport corporation will request an investigation into “fake news” stories that claim to be reporting conversation between subcontracted security guards on an online community.

According to those stories, one security guard said they “started working as a part-timer earning 1.9 million won [$1,600] per month but [will] become a regular employee with 50 million won per month."

The security guard is said to have added: "Seoul National University, Yonsei University and Korea University are all useless.”


Kim argues that the story doesn't add up.

“Even if [they] become regular workers, they won't get 50 million won," he said. "A salary between 3.6 million won and 3.8 million won is being considered.”

He stressed that the chat room can be used by anyone anonymously.

Rep. Chung Il-young of the ruling Democratic Party, a former airport corporation CEO, confirmed the likely security guard salary in an interview with the JoongAng Ilbo on Thursday.

“Raising [the subcontracted security guards’] salary by 20 percent is impossible. Raising the salary wasn’t the purpose of converting them to regular workers.”

While describing the backlash as a "misunderstanding” and the situation as “frustrating," Chung added, “The opportunity for public recruiting is as open to students preparing for employment as it was before. Offering regular employment to subcontracted security guards won’t reduce the number of people [the airport corporation] hires.”