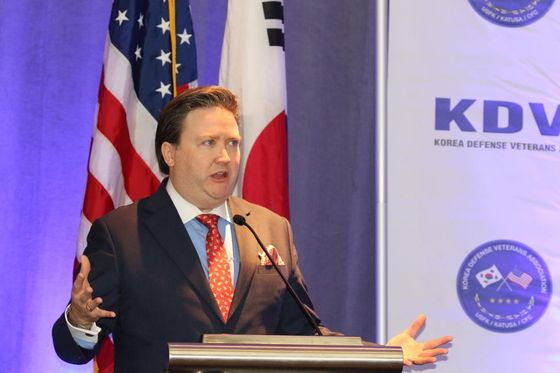 Marc Knapper, the U.S. deputy assistant secretary of state for Korea and Japan, speaks at a forum in Washington last December. [YONHAP]

The “door to diplomacy” with Pyongyang remains open, according to Marc Knapper, the U.S. deputy assistant secretary of state for South Korea and Japan, who on Wednesday stressed that Washington and Seoul remain “unified” in this view.

"We remain ready to engage in dialogue with the North, and we remain committed to a diplomatic solution to address the nuclear and missile issues,” Knapper said during a virtual seminar hosted by Asia Society Korea. “And we have to work hand-in-hand with the South Koreans to do this.”

North Korean leader Kim Jong-un called off military confrontation against the South Wednesday, deescalating tensions on the peninsula. The North demolished a joint liaison office at Kaesong last week amid a standstill in denuclearization negotiations with Washington since last year.

While John Bolton, the former U.S. national security adviser, in his new memoir, “The Room Where It Happened,” undercut negotiations with Pyongyang and described Seoul as a third wheel in the process, Knapper noted that such details of sensitive topics of discussion with allies are “meant to be sacred.”

“One of the features of that time was the intense level of dialogue we were having with our South Korean allies,” Knapper added.

Before taking his current position in Washington in August 2018, Knapper served as U.S. chargé d’affaires and deputy chief of mission to Seoul during a period of escalated tensions followed by a détente and intense dialogue with North Korea.

He also left open the possibility of resuming North-U.S. negotiations ahead of the American presidential elections in November, addressing the question of an “October gift” by Pyongyang.

"History has shown the North Koreans seem quite capable of engaging in an election year,” he said. “But again, I hesitate to sort of get much beyond that.”

John Delury, a professor of Chinese Studies at Yonsei University who led the discussion, asked about Seoul being forced to choose between Washington and Beijing amid intensifying Sino-U.S. tensions on economic and security matters.

“I understand that [Seoul] certainly doesn’t want to make a choice,” said Knapper. “But I think when it comes to things like shared values, when it comes to things like shared interests and shared goals, this is something the United States and Korea do talk about quite a bit, and it’s something we do reflect on in trying to figure out what’s the best way to deal with the PRC [People's Republic of China] and the Chinese Communist Party.”

Knapper also weighed in on the ongoing spat between Seoul and Tokyo over trade and historical issues and urged not just a reconciliation on these issues but for a “resolution that paves the way for a more productive and constructive relationship going forward.”

On Washington’s position, he added, “We can absolutely play a role. Just because we say publicly we are not mediating, or we are not taking sides, that absolutely doesn’t mean that we don’t care. It just means that we want to be respectful and ensure that the protagonists in this are able to find a way forward together.”

The Senior Economic Dialogue to be led later this year by Korean Second Vice Foreign Minister Lee Tae-ho and his U.S. counterpart, Keith Krach, is expected to discuss a U.S. push to shift global supply chains away from China.

The two countries on Thursday recognized the 70th anniversary of the start of the Korean War of 1950-53, which ended in an armistice agreement.

Korea’s First Vice Foreign Minister Cho Sei-young stressed the importance of South Korea being recognized as an “equal partner of the United States” in a separate virtual seminar Wednesday, looking back to 70 years of the bilateral alliance.

“There is a corresponding expectation among the Korean people for genuine recognition and appreciation as an equal partner of the United States,” Cho said during the seminar, hosted by the Washington-based think tank Center for Strategic and International Studies (CSIS) and Korea Foundation.

Cho made the remarks addressing the tough defense cost-sharing negotiations with Washington on the stationing of U.S. troops in Korea and noted that Seoul has been increasing its financial contributions.

He added that Seoul paid over $900 million, or an 8.2 percent annual increase from the previous year, under the previous bilateral Special Measures Agreement which expired at the end of 2019.

Cho said that the alliance goes beyond a security partnership and added, “Geographically, it is no longer limited to the Korean Peninsula and has evolved into a global partnership.”

“The role and status of the UN Command is also an important subject in the evolution of the alliance,” said Cho. “The UNC has kept the armistice for the past 70 years. While Korea is deeply grateful for these efforts, the Korean public also recognizes that it is time for Korea to take center stage in maintaining its own peace and security, by ending the current state of armistice and establishing a permanent peace regime on the Korean Peninsula.”

Cho added that lifting restraints on developing space and satellite capabilities was “a good place to start.”

Bolton in his memoir had been dismissive on an end-of-war declaration and said he had been “determined to stop anything legally binding” and concerned about legitimizing the Kim Jong-un regime.

He wrote, “Substantively, the ‘end of war' idea had no rationale except that it sounded good.”

Cho said in the CSIS webinar that bringing North Korea back to the negotiating table, achieving denuclearization and creating a peace regime on the Korean Peninsula will “also open up opportunities for Washington to implement its strategic objectives in the region” and ultimately strengthen the alliance. 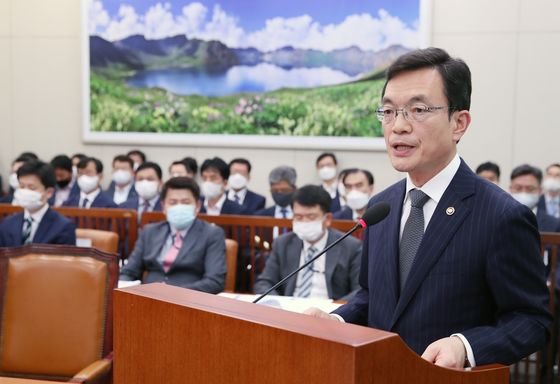 Time for a reinforced nuclear deterrence