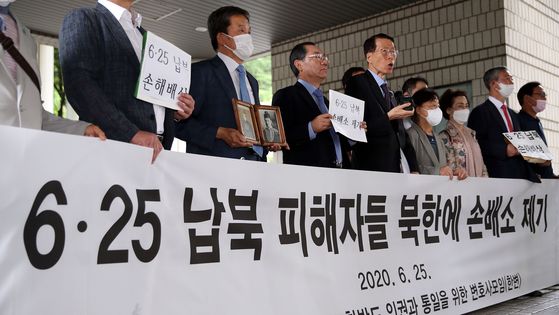 Lawyers for Human Rights and Unification of Korea holds a press conference in front of the Seoul Central District Court in southern Seoul on Thursday, announcing it has filed a lawsuit on behalf of the the families of 13 people abducted by North Korea during the 1950-53 Korean War. [YONHAP]


The families of South Koreans abducted by the North during the 1950-53 Korean War are suing the North Korean regime and its leader, Kim Jong-un, in a local court, asking for billions of won for damage incurred throughout seven decades.

Lawyers for Human Rights and Unification of Korea, a civic association made up of attorneys specializing in legal issues regarding North Korea, announced in a press conference Thursday it filed the lawsuit in Seoul Central District Court on behalf of 13 people whose family members were kidnapped by North Korean authorities during the war.

The families are asking for 34 billion won (around $28.2 million) in damages from North Korea, the group said, on the 70th anniversary of the June 25, 1950 outbreak of the war.

“On that day 70 years ago, [North Korea’s founder] Kim Il Sung launched a surprise invasion of the South and in order to gain human resources kidnapped around 100,000 civilians from the South, including members of South Korea’s early leadership and top professionals from many fields,” the organization said in a press release.

Among those figures whose families filed the lawsuit were Jeong In-bo, a well-known historian during the Japanese rule over Korea (1910 to 1945) known for writing songs for five of Korea’s major holidays; Lee Gil-yong, a former Dong-A Ilbo reporter; and Kim Yoon-chan, a former judge of the Seoul Central District Court.

“We can no longer wait for the [South Korean] government to act, nor do we have anyone to appeal to,” said Kim Tae-hoon, the head of the organization. “So we have finally resolved to file a damages lawsuit directly against the North Korean government and Kim Jong-un.”

North Korea refuses to accept responsibility for the systematic abduction of civilians during the war, or to inform family members in the South of the whereabouts of the abductees, the group claimed in the press release.

According to the group, the suit was filed on the basis of the findings contained in a report from the United Nations Commission of Inquiry on Human Rights in North Korea in 2014, as well a report commissioned by the South Korean government in 2017, both of which showed the kidnappings corresponded to war crimes and crimes against humanity listed in the Rome Statute of the International Criminal Court.

The abductions also constitute a serious criminal act under the South Korean Constitution and civil law, the group said. The civic organization pointed to another lawsuit currently under review in Seoul, filed by two former South Korean prisoners of war who escaped the North after 67 years in the regime.

It is questionable, however, whether a South Korean court will be able to try the case given the ambiguities in the legal relationship between the two Koreas.

Pyongyang is not a signatory to the Rome Statute, and South Korean domestic law carries no weight in the North, which is formally considered an “anti-state organization” under South Korean law.