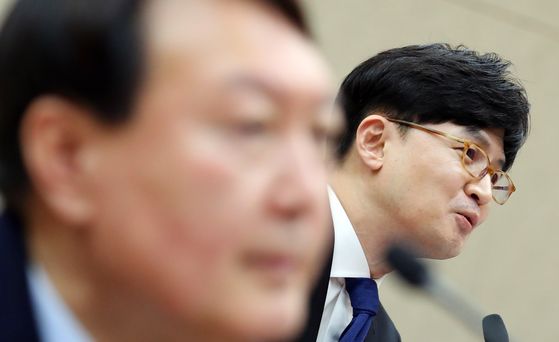 In this file photo, Han Dong-hoon, a senior prosecutor and a close associate of Prosecutor General Yoon Seok-youl, right, speaks during an Oct. 17 National Assembly hearing. Yoon, left, also attended the session. The Ministry of Justice said it will directly investigate Han for alleged collusion with a reporter. [YONHAP]


The Ministry of Justice said Thursday it has launched an internal investigation of Han Dong-hoon, a senior prosecutor and close ally of Prosecutor General Yoon Seok-youl, for allegedly conspiring with a reporter to blackmail an executive in order to take down a media personality friendly to the current administration.

The ministry said Han, deputy head of the Busan High Prosecutors’ Office, will be removed from his duty and assigned as a researcher of the Institute of Justice starting Friday.

Han, who previously served as the head of the Supreme Prosecutors' Office's anti-corruption department, is separately being investigated by the prosecution as a result of the same allegations, which first surfaced in March as an investigative report published by the MBC television outlet.

Han has consistently denied his involvement.

The ministry said it will conduct an investigation into the allegation that Han is a co-conspirator of a broadcast reporter who used blackmail to obtain incriminating information on Rhyu Si-min, a liberal pundit with close ties to the Moon Jae-in administration.

The Internal Inspections Headquarters of the Supreme Prosecutors’ Office has the primary jurisdiction to conduct investigations into prosecutors. But the Justice Ministry has the authority to conduct a direct investigation if ordered to do so by the minister — typically in high-profile cases or when the integrity of the prosecution’s own probe is questioned.

The Seoul Central District Prosecutors’ Office is investigating allegations that the reporter, Lee Dong-jae from Channel A, had threatened Lee Cheol, an executive convicted for violating finance laws, to obtain incriminating information on Rhyu. In the process, the reporter allegedly told Lee Cheol that he had the backing of Han.

The ministry said it decided to conduct the internal probe because Han was named a suspect in the prosecution's criminal investigation. He was assigned to the new post because it seems impossible for him to perform his duty of commanding and control criminal probes, the ministry said.

“If a fair, unbiased probe is conducted, I believe my innocence will soon be confirmed,” Han said in a statement on Thursday. He added that he disagreed with his new assignment, but will do his best to fulfill his duty as a public servant.

The ministry said President Moon approved the reassignment of Han earlier in the morning. It said it informed Yoon in advance.

Han, a longtime associate of Yoon, has built up his career by conducting special investigations into high-profile cases. When Yoon served as head of the special investigation unit to probe former President Park Geun-hye’s alleged abuses of power and corruptions, Han was a member of the team. Later, he was named the third deputy head of the Seoul Central District Prosecutors’ Office.

After Yoon was named the prosecutor general in July last year, Han was promoted to head the anti-corruption department.

But while leading the investigation into alleged financial and academic fraud by former Justice Minister Cho Kuk and his family, Choo sent Han to the Busan High Prosecutors’ Office in January. The assignment was broadly seen as a demotion.