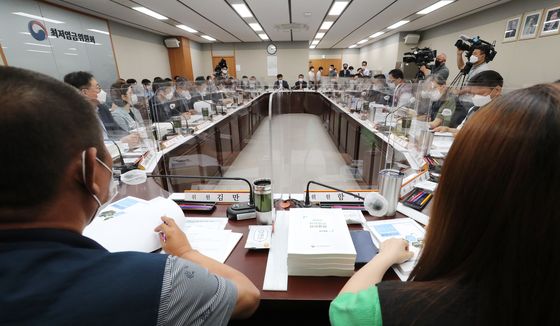 Participants attend a meeting of the Minimum Wage Commission in the administrative office in Sejong Thursday. [YONHAP]

The annual negotiations to set the minimum wage for next year failed to reach agreement Thursday.

The Minimum Wage Commission comprised of 27 members representing companies, labor and the general public, held its second meeting at the administrative office in Sejong on Thursday. All 27 including representatives of Korea’s two largest umbrella labor groups, the Federation of Korean Trade Unions (FKTC) and Korean Confederation of Trade Unions (KCTU) participated.

The meeting hashed out theoretical issues such as setting different minimum wages for different types or sizes of businesses. Park Joon-shik, the commission's Chairman, requested the two union groups to come up with an initial proposal by the third meeting on June 29.

The KCTU requested last week a 25.4 percent increase to 10,770 won per hour. In response, Kim Dong-myeong, president of the FKTU, held a press conference on June 24 to say that rate didn't reflect the public's demands but only fulfilled the needs of the KCTU.

“Most recently, the International Monetary Fund lowered its economic growth outlook for Korea from negative 1.2 percent to negative 2.1 percent,” Ryu Ki-jung, executive director of the Korea Employers Federation, said during the meeting Thursday.

“This kind of financial situation may push small- and medium-sized business owners over the edge. The minimum wage should be determined in a rational way after taking into account the current employment and financial situations, as well as those of employers and job seekers.”

Lee Dong-ho, general secretary of the FKTU, said spending by lower income groups has dropped by a larger margin than for the higher income brackets.

"A normal wage increase is needed especially in a difficult time like this," Lee said. "Wage of employees at conglomerates and state-run agencies have increased despite the coronavirus. If the minimum wage, which is the only lifeline for the lower income groups, cannot catch up, it will only lead to more intense wage inequality and social polarization.”

During the meeting, the KCTU's Yoon Taek-geun urged commission members representing the public to resign, claiming they were not paying enough attention to the unions' demands.

An agreement is needed by July 15 as the Ministry of Employment and Labor is scheduled to finalize the minimum wage on Aug. 5.