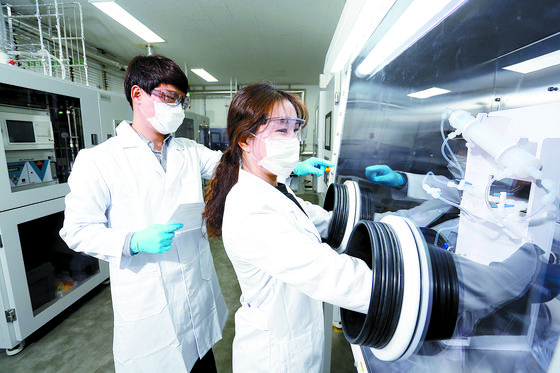 
Korea’s technology industry went on high alert after Japan placed export restrictions on essential materials for the semiconductor and display production on July 4, 2019.

Last year’s trade spat had its roots in political and historical tensions between the neighboring nations. Japan accused Korea of lax export controls, while the Korean government said Japan’s restrictions were retaliation for Korean Supreme Court rulings in 2018 on forced labor compensation.

One year since Japan’s trade measures, industry experts are breathing a sigh of relief as Korea’s key industries hit by the restrictions have been rising to the occasion.

Japan frustrated sales to Korea of hydrogen fluoride, fluorinated polyimide and photoresists, which are used in semiconductor, smartphone and display production. Japan then eliminated Korea from its “white list” of trade partners. 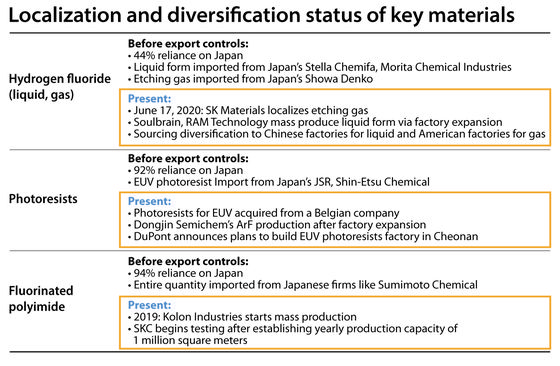 
Korean industry had been highly dependent on Japan for key materials.

“Japan gave South Korea a wake-up call,” said Park Jea-gun, an electronics engineering professor at Hanyang University. “If Japan did not impose the trade ban on Korea, Korea would not have set out to localize production and diversify sources like we are doing right now.”

Efforts from both the public and private sectors paid off — the government has been backing policies for developing key materials, and corporations have diversified their sources of supply and turned to domestic production for the affected materials, parts and equipment.

Hydrogen fluoride gas, also known as etching gas, is used in gas or liquid form to clean surfaces or etch patterns on semiconductors.

Photoresists, which are used to form circuit patterns on chips, were 92 percent produced in Japan. Currently, the import sources have been diversified to include Belgium and Germany. Domestic companies like Dongjin Semichem, which produces argon fluoride, will expand its factories. SK Materials is also planning to finish building its factories for argon fluoride by next year, to begin producing the substance in 2022.

Photoresists for extreme ultra violet (EUV) lithography used for ultra-fine manufacture of under 5 nanometers have not been localized. Wilmington, Delaware, U.S.-based Dupont decided early this year to build a photoresist factory for EUV lithography at Cheonan, South Chungcheong. The Ministry of Trade, Industry and Energy worked with the chemical company to lure investors. The substance has not been completely localized, but supply has been secured through the foreign enterprise.

Fluorinated polyimide, one of the key materials facing import restrictions, is in the process of localization. The material is used for production of flexible displays, such as foldable smartphones and rollable TVs. Last year, Kolon Industries started mass producing fluorinated polyimide after establishing manufacturing facilities in Gumi, North Gyeongsang. SKC, a 41-percent subsidiary of SK Holdings, has been carrying out tests at Jincheon, North Chungcheong, where up to 1,000,000-square-meter yearly production is feasible.


Contrary to the projections, Japanese companies have been suffering negative impacts from the trade restrictions. The Nikkei reported that Stella Chemifa Corporation, the top Japanese producer of hydrogen fluoride, faced a 12 percent drop in sales and 32 percent reduction of its operating profit in the first quarter. The company’s shipments of pure hydrogen fluoride went down by 30 percent during the same period.

The Nikkei added that although Japanese corporations are requesting a resumption in exports to Korea, Korean buyers are no so interested these days of being customers.

“Not only is it difficult to switch the supply sources, but the industry is also not considering returning to Japanese materials,” said a semiconductor industry official. 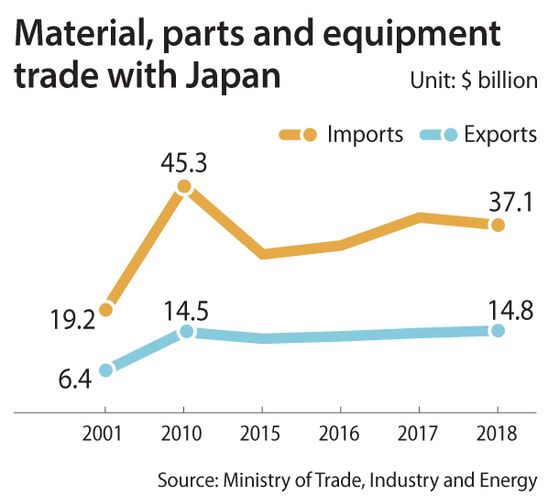 The government has played a significant role in securing the materials and localizing production. The trade ministry has been backing the production of fluorinated polyimide since 2010 and photoresists since 2002, as part of technical development efforts.

The operation of an emergency response center for supplying materials and parts has been critical in alleviating the difficulties faced by firms following the import restrictions.

“Since last August, the country has been putting an all-out effort in strengthening the competitiveness of supply by taking measures, such as taking special care of the supply for 100 core products since last August,” said Park Dong-il, the deputy director general of the trade ministry’s material and components division.”

Cooperation between conglomerates and small- and medium-sized businesses has been established in a short period.

“The efforts of the government and corporations must not peter out,” said MiCo, an engineering company that produces heaters and electrostatic chucks for semiconductors. “The government funding should continue to increase in order to gain competitiveness in the material industry.”