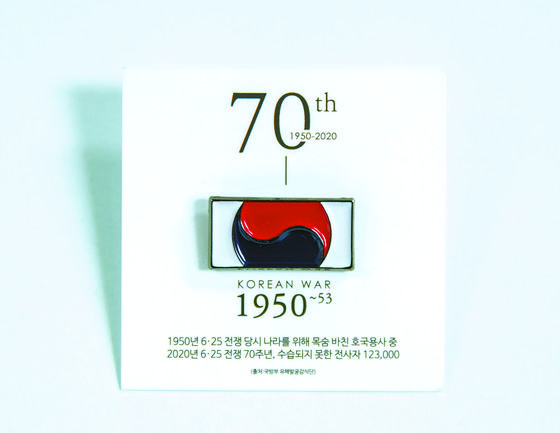 The Taegeukgi badge, symbolizing Korea's national flag laid atop a box containing the recovered remains of soldiers from the 1950-53 Korean War. [PARK JONG-KEUN]


On the eve of South Korea’s Memorial Day, nine university students gathered at Gwanghwamun Square, carrying banners that bore a symbol both old and new.


Emblazoned on the banners, as well as on badges pinned to each student’s shirt, was the same emblem: A cropped version of the Taegeukgi, South Korea’s national flag — its familiar yin and yang adorning a white background.

The students, all members of the School of Communication at Kwangwoon University, set out that day to promote this new symbol, designed to memorialize the spirit of sacrifice and love for the country.


Formally titled “The Taegeukgi we must recover 122,609,” the symbol represents the shape of the flag laid on top of a box carrying the remains of South Korean troops recovered from the country’s many battlefields of the Korean War (1950-53).

The number 122,609 stands for the fallen whose remains have yet to be recovered — and the challenge that lies ahead for the Ministry of National Defense’s Agency for KIA Recovery and Identification.


The design is the brainchild of Professor Lee Jong-hyuk, a publicity expert at Kwangwoon University, who produced 500 badges with the symbol in commemoration of the 70th anniversary of the outbreak of the Korean War.


When Lee first asked his students whether they would be willing to don the Taegeukgi badge, their initial reactions were lukewarm. But their attitudes changed after they learned the meaning behind the symbol.

His students became active in promoting the badge on social media to their peers in their teens and 20s and shipped the badge to anyone interested in donning it. Even a high school student from the Gyeongsang region asked for the badge.

Pretty soon, they'd given away all 500 badges, but demand continued to grow. 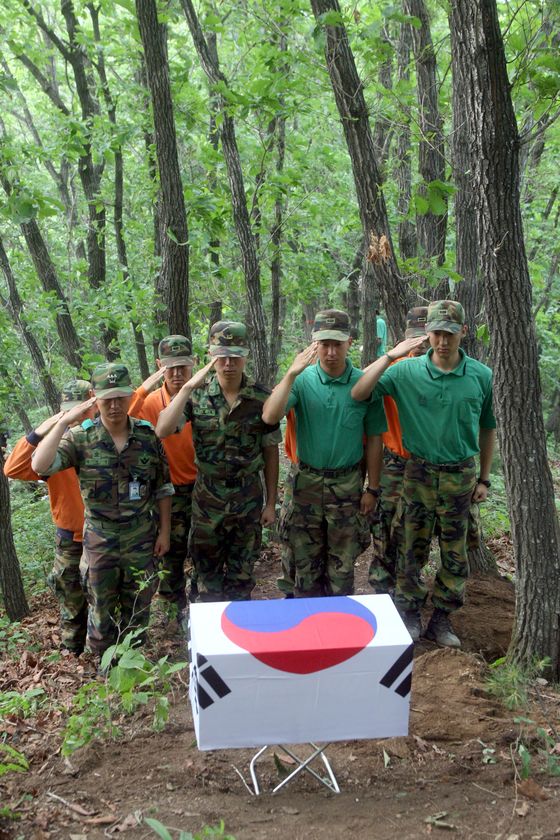 Officers of the Ministry of National Defense's Agency for KIA Recovery and Identification salute a box containing the remains of South Korean soldiers recovered from a Korean War battlefield. [CHOI JEONG-DONG]


“The response to the badges was very positive,” said Lee Jeong-yoon, 24, one of the students participating in the campaign. “The Taegeukgi had taken on a political color, but [our campaign] showed people still regarded it importantly.”


Lee Jeong-yoon added the symbol was particularly poignant for her because her maternal grandfather was buried at the Seoul National Cemetery in southern Seoul as a veteran of the Korean War, and some of her relatives who fought in the war were never recovered.

Yoon Jae-woo, 25, another student participant, said many of his friends came to understand the significance of the movement once they learned its purpose.

The movement is voluntarily led by youths in their 20s — of particular note given that the Taegeukgi has taken on a political connotation in Korea due to its frequent use by older, right-wing demonstrators.

“Awareness of the true values represented in the Taegeukgi seems to have faded among the younger generation, to the extent that people find it awkward to hang up the flag on Memorial Day,” said Kwon Yong-joon, 23, another one of the members of the campaign. “Many youths don’t even know when the Korean War broke out.”


Professor Lee said the impetus behind the movement was borne out of his puzzlement over the reality that many people in Korea have come to associate the Taegeukgi as something that only old men carry around.

Seventy years after the war, Lee said he was searching for an appropriate symbol to memorialize sacrifice and patriotism.

“All people have patriotism in their hearts but find it difficult to express such a sentiment,” Lee said, comparing it to the ineffable feeling of love for one’s parents. “That’s why we use carnations to express our [love for our parents]. Patriotism needs the same medium.”


Lee said he felt it necessary to obtain government support for the Taegeukgi movement, to help promote the symbol into something comparable to the remembrance poppy.

In Britain and France, the artificial flower known as the remembrance poppy is used to represent veterans’ associations. It was originally created to commemorate the sacrifices by those who fought in World War I.

Korea’s Ministry of Patriots and Veterans Affairs attempted to create an equivalent known as the big tree badge in 2005, but the symbol never caught on.

“We looked at various precedents around the world that we could benchmark, but we had no good ideas. But the design proposed by Professor Lee contained within it a truly Korean meaning of sacrifice,” said Choi Jeong-shik, a communications official at the Veterans Ministry.


The ministry plans to use Lee’s design to manufacture 122,609 badges to symbolize each of South Korea’s fallen soldiers yet to be recovered.

Before officially launching the campaign, the ministry put up banners adorned with the symbol in densely visited places like Gwanghwamun Square or the main street in Gangnam District, southern Seoul, to generate interest in the project.

“The average age of the surviving veterans of the war is reaching 90,” Choi said. “This is our way to commemorate the historic significance of the sacrifice they have made, while they are still alive.”