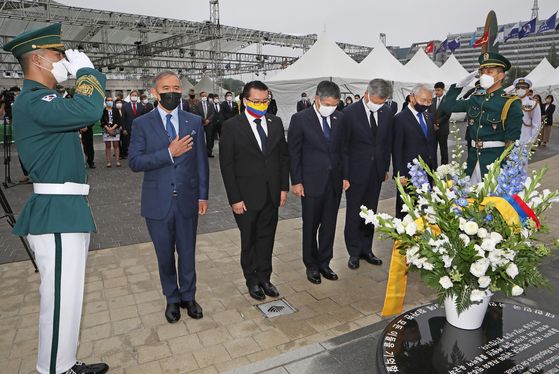 From left, Ambassador of the United States to Korea Harry Harris, Ambassador of Colombia to Korea Juan Carlos Caiza, Minister of National Defense Jeong Kyeong-doo and Minister of Patriots and Veterans Affairs Park Sam-duck, pay tribute to veterans of the Korean War at the War Memorial of Korea in central Seoul on Friday. The commemorative event for the 70th anniversary of the outbreak of the Korean War, organized by the Colombian Embassy in cooperation with the war memorial, included diplomats, military officials and members of the defense ministries of Korea and Colombia. Colombia's Defense Minister Carlos Holmes Trujillo joined the event via online streaming. [PARK SANG-MOON]