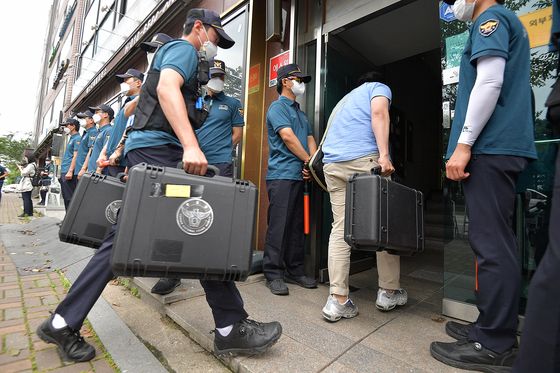 Police raid the office of Fighters for a Free North Korea, a civic group run by North Korean defectors resettled in the South, in Gangnam District, southern Seoul, on Friday. [YONHAP]

South Korean police on Friday raided the offices of North Korean defector groups accused of sending propaganda leaflets across the border into the North.


The raids on the Seoul offices of Park Sang-hak, a North Korean defector who leads the group Fighters for a Free North Korea, and his brother Park Jung-oh, head of another activist group called Keun Saem, marked a major step taken by the South Korean government to punish defector groups for inciting provocation from North Korea.

According to the writ issued for the raid, the two groups are accused of violating four laws, including an act pertaining to inter-Korean exchange and cooperation, for dispatching what they claimed were 500,000 leaflets into the North on May 31.


The two groups floated balloons filled with leaflets, one-dollar bills, memory sticks and books across the heavily fortified demilitarized zone (DMZ), an act which triggered the North into retaliating with a vitriolic warning from Kim Yo-jong, North Korean leader Kim Jong-un’s younger sister. The North followed up on those threats later this month by unilaterally demolishing the inter-Korean office in Kaesong.

Following a similar attempt by the two groups to send rice to the North in water bottles from the coast of Ganghwa Island, Incheon, Seoul’s Ministry of Unification filed charges against the groups for sending materials to the North without prior approval from the government.

Park Sang-hak fiercely protested the raid on his office, telling the press that the government crackdown over the leaflet issue represented a violation of defectors’ right to free speech.

“As long as Kim Jong-un’s despotism continues to cause the death of more North Korean people and as long as political prison camps continue to exist in North Korea, we will continue to send leaflets,” Park said, vowing the government’s efforts to contain their organizations would not stop them from attempting to incite agitation in the North.


The two brothers’ mobile phones and automobiles were also searched for evidence. Police are also investigating Park Sang-hak on suspicions that he physically assaulted reporters from the local broadcasting company SBS in front of his house on Tuesday.

Police say the materials obtained during the raids would be analyzed to examine how the organizations generated funding for their projects and how they used their budgets, based on charges filed by Gyeonggi’s provincial government.

After a North Korean defector threatened to detonate a hydrogen gas tank near his house on June 22 in apparent retaliation against orders to crack down on the leaflets, Gyeonggi Gov. Lee Jae-myung said he planned to closely examine how defector groups were using their funding, as well as possible criminality of their activities.

But steps by South Korea’s local and central governments to rein in the leaflet scatterings did little to deter the groups. Fighters for a Free North Korea claimed it sent another 500,000 leaflets in 20 balloons into the North on June 22. One of the balloons was found alongside a stream in Hongcheon County, Gangwon, the next day, and around 600 more leaflets were discovered in Gwangju, Gyeonggi, on Friday.