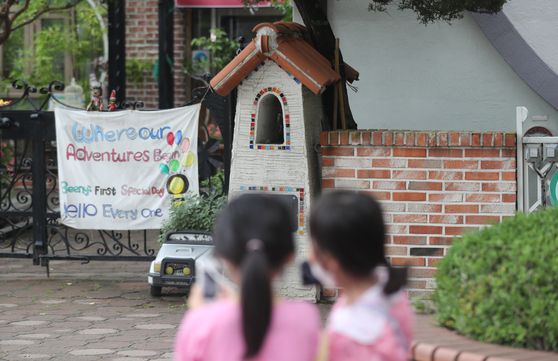 Over 100 kindergarteners, family members and teachers came down with symptoms of food poisoning in Ansan, Gyeonggi, in the past two weeks. A group of 15 patients are being treated for hemolytic-uremic syndrome (HUS), or the "hamburger disease," as of Sunday. [YONHAP]

A group of parents whose children got sick with food poisoning at a kindergarten in Ansan, Gyeonggi, are suing the school’s director, said police Sunday.

According to the Ansan city government Sunday, 111 of a total of 202 students and teachers at the kindergarten have come down with symptoms of enterohemorrhagic E. coli as of Saturday.

City officials said 22 people have been hospitalized — 20 children and two family members, of which 15 patients are being treated for hemolytic-uremic syndrome (HUS), or the so-called hamburger disease, which can cause severe kidney failure and may even be deadly. Four young patients are still receiving kidney dialysis out of the original five.

Enterohemorrhagic E. coli, a strain of the E. coli virus that can cause severe intestinal infections, can progress to HUS.

Such E. coli can be contracted from eating undercooked meat contaminated with the bacteria and can also be spread person-to-person.

The first symptoms of food poisoning at the kindergarten in Sangnok District in Ansan appeared on June 12 after a student complained of stomach pain. Some 10 more students had fallen ill by June 16, when the kindergarten reported the outbreak to the local health authorities.

The Ansan city government ordered the testing of 295 students, teachers and cooks and family members of patients, 57 of which tested positive for the E. coli bacteria as of Saturday and 190 negative. Results for 48 people are still pending.

However, exactly how the bacteria spread in the kindergarten is still unknown.

A group of six parents are suing the director of the kindergarten for violating the Food Sanitation Act and negligence of duties.

They accused the director of destroying evidence by not storing food according to regulations and demanded a thorough investigation into the cause of the incident. One parent representing the plaintiffs was questioned by police Sunday.

After the outbreak, Ansan city authorities gathered 104 samples from preserved food, cooking utensils, doorknobs, bathrooms, classrooms and utensils from the food supplier, but all tested negative for the bacteria.

The kindergarten was fined 500,000 won ($400) for not following health regulations on correctly storing six lunch and snack ingredients, including tteokbokki (Korean-style rice cakes) and dumplings between June 10 and 15.

The law requires institutions that prepare such mass meals to properly store such ingredients for 144 hours in order to trace causes of food poisoning.

Health authorities have also been reviewing the kindergarten's extracurricular activities as it is possible for the bacteria to be contracted through contaminated dirt or water.

An official of the Ansan Sangnoksu Health Center said, “We are investigating leaving all possibilities open.”

The Ansan kindergarten director said, “We didn’t get rid of the food intentionally, but did so because we didn’t know,” and also sent an apology text message to parents Saturday.

The director's response did little to quell parents' anger who questioned what the children could have eaten that would result in bloody stools and acute cases of HUS. They also point out that it is ridiculous that an experienced kindergarten director didn’t know the regulations.

One 45-year-old mother has since withdrawn her 7-year-old child from the kindergarten. She said on June 16 that parents received a text message from the kindergarten explaining several students showed signs of food poisoning and went to the hospital and that “various diseases could spread in the summertime.”

She said, “Who would have known the situation would be this serious after receiving that text message. We just thought it was a stomach bug because it’s the summer season. There is a child who had diarrhea and went to the emergency room today. The kindergarten said it’s over because they paid a fine, but how were things managed so that so many children are ill?”

A Blue House petition started by a parent Thursday has garnered over 39,000 signatures as of Sunday afternoon.

A civic group of activist mothers separately filed a complaint against the kindergarten’s director for negligence of duties on Friday.

The Ansan city government has ordered the kindergarten to remain closed from June 19 to 30.

Moderna and IAVI to cooperate on developing vaccines