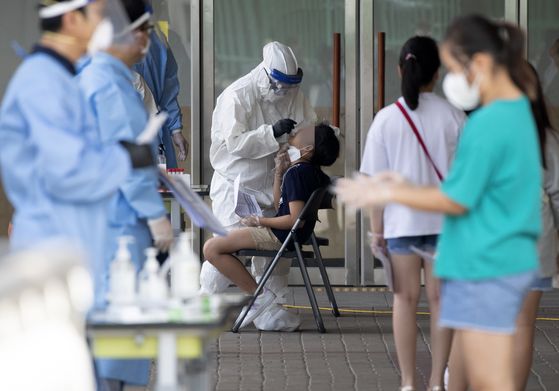 Students get tested for Covid-19 at a center set up at Nanwoo Elementary School in Gwanak District, southern Seoul, on Sunday, after a lecturer at the school was diagnosed with the coronavirus. [YONHAP]


The government announced Sunday that it will adopt a three-level social distancing system that could more strictly limit social activities depending on the severity of the coronavirus outbreak.


The Korea Centers for Disease Control and Prevention (KCDC) introduced a more detailed system to tighten restrictions on social gatherings and group activities depending on the status of Covid-19 cases in the country.

The KCDC currently recommends "level one" social distancing, in which the number of virus cases can be managed through standard quarantine practices and the country's health care system.

"Level three" measures will go into effect if daily cases exceed 100 twice in one week, and could lead to school closings and a ban of gatherings of 10 or more people.

There were 62 new Covid-19 patients as of Saturday at midnight, of which 40 were local infections and 22 were imported cases, the KCDC announced Sunday. The new cases raise Korea's total to 12,715.

It marked the second time in eight days that the new caseload surpassed 60. On June 20, 67 new patients were confirmed. The KCDC reported 51 new cases as of Friday at midnight.

The most new cases were reported in Gyeonggi, with 17 new patients, followed by 14 in Seoul.

Authorities are concerned that new cases are emerging in parts of the country where there haven’t been any known coronavirus patients.

Gwangju and Mokpo in South Jeolla are alarmed over the new cases in the area, with patients who have visited university hospitals, hot springs, schools and social gatherings. Mokpo had not reported any cases since April 1.

Two new cases were patients confirmed as having recently visited Chungnam National University Hospital in Daejeon. This led to the emergency room shutting down as of Saturday evening. The 39 patients in the emergency ward tested negative for the virus.

The cases in Daejeon linked to door-to-door salespeople and churches remain on the rise, with three new cases in the former cluster bringing the total caseload to 78.

Local quarantine authorities are still tracing the transmission routes of four new Covid-19 patients in Daejeon over the past two weeks, as it is still unclear how they got infected.

Churches are also contributing to the spike in recent local transmissions in Seoul and the metropolitan area.

A 26-year-old part-time lecturer at Nanwoo Elementary School in Gwanak District, southern Seoul, tested positive for the coronavirus. The lecturer was linked to a cluster of infections at Wangsung Church in Gwanak District, which has produced 27 cases so far, with eight new patients confirmed Sunday. 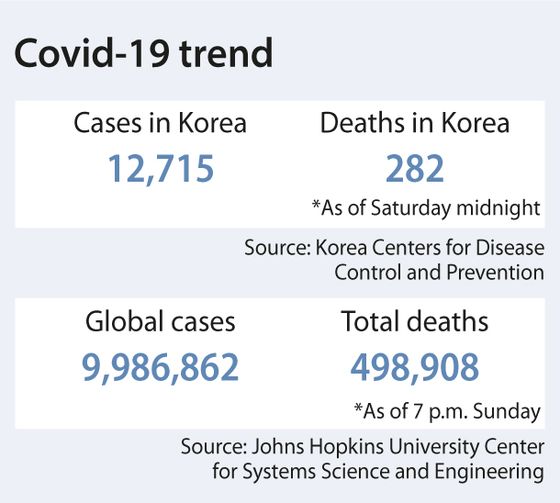 Nanwoo Elementary School suspended in-person classes and will hold remote lessons Monday. Some 160 students and teachers in the fourth and fifth grades received testing on the campus on Sunday.

A 31-year-old woman last Wednesday was the first known patient to be infected from the church, which has more than 1,700 followers. More than 1,800 churchgoers and their family members are in the process of being tested.

In the Wangsung Church cases, eight were from a group who traveled together for a church retreat on June 19 and 20, while others were linked to a church choir and Sunday services. The church was closed as of Friday and was fined 3 million won ($2,500) for violating quarantine restrictions.

The Gwanak District Office warned 110 larger churches in the area — those with over 100 members — to hold online services instead of congregating in person.

Eighteen cases have been linked to another church in Anyang, Gyeonggi, after a 25-year-old woman was first confirmed positive on Friday.

And three patients were linked to another megachurch with about 9,000 followers based in Suwon, Gyeonggi. The patients came in contact with at least 717 people after attending services five times this month.

Quarantine authorities said they are reviewing whether to designate religious facilities as high-risk places, alongside night clubs, bars and karaoke facilities.

There were two more infections related to the Richway health care company in Gwanak District, bringing that cluster's total number of cases to 207.

Quarantine authorities were unable to trace infection routes for 71 of 631 new patients, or 11 percent, during the past two weeks.

No additional deaths were reported, with the tally remaining at 282.