Korea at a crossroads

Korea at a crossroads

Jeong Jae-hong
The author is an editor of international, foreign policy and security issues at the JoongAng Ilbo.


Despite a series of provocations from North Korea, President Moon asked the people to be patient and overcome the challenge with talks between North Korea and the United States. North Korea threatens the South with nuclear weapons, but Moon’s prescription is “patience.” He seems to be ignoring the reality of the Korean Peninsula and holding onto the mirage of inter-Korean cooperation.

South Koreans have endured harsh remarks and tantrums of North Korea. They hoped North Korea would turn to reform and openness. But the Kim Jong-un regime has clearly stated that its priority is maintaining the system rather than economic development, and it would prefer to not give up its nuclear program. Without the weapons, North Korea will become the world’s poorest in the world and wouldn’t be able to maintain the Kim dynasty. Former White House National Security Advisor John Bolton said in a recent interview that North Korea-U.S. nuclear negotiations are over.

North Korea considers itself a “strategic country.” The North does not regard the South as a negotiating partner and claims that it won the competition of systems by possessing nuclear weapons. So North Korea’s talk partners are nuclear powers like United States or China, and it treats South Korea as a step below for relying on North Korea’s good will. The Moon Jae-in administration holds on to inter-Korean talks despite humiliation from the Kim regime, making it more proud.

Has the South lost in its competition with the North? Hardly. It is unreasonable to compare North Korea, which is barely able to keep its people fed and maintain its dictatorship, to South Korea. South Korea is a major global economy and its ability to control the spread of the coronavirus has received international accolades. 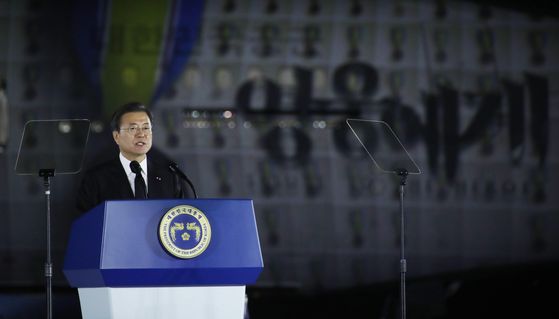 During a ceremony to commemorate the 70th anniversary of the outbreak of the Korean War, President Moon Jae-in stresses the importance of perseverance in dealing with North Korea. [JOINT PRESS CORPS]

South Korea’s accomplishments are worthy of pride — notably, attaining $30,000 per-capita national income and democracy after the devastation of the 1950-53 Korean War. What made today’s Korea were the sacrifices of the soldiers killed during North Korea’s invasion 70 years ago, the Korea-U.S. alliance defending Korea’s liberal democracy after the war, Park Chung Hee’s direction for economic development and President Kim Dae-jung’s inter-Korean reconciliation. The factional rhetoric undermines the splendid accomplishments of Syngman Rhee, Park Chung Hee and Kim Dae-jung.

Mao Zedong, who sacrificed tens of millions of lives during the Great Leap Forward and the Cultural Revolution, gets a positive review with “70 percent merits and 30 percent faults.” Korea needs to recognize the accomplishments of past presidents for their efforts to resolve challenges of the times. These leaders had some faults, but denying their merits is narrow-minded and fails to appreciate Korea’s historical accomplishments.

President Moon should prepare realistic plans to counter North Korean nuclear threats while building on our proud history. Nuclear bombs — the “absolute weapon” — need to be blocked with nuclear weapons. While South Korea has superior conventional power, it cannot match a nuclear-armed North Korea. It is unrealistic for South Korea to develop nuclear weapons on its own. If we withdraw from the Nuclear Non-Proliferation Treaty (NPT), our economy would suffer unbearable damage due to retaliation from the United States and China. In the end, South Korea should move toward surer security under the nuclear umbrella of the United States.

The most realistic way is to strengthen the Korea-U.S. alliance further. One of the reasons Pyongyang ignores Seoul is that it thinks South Korea has little influence on the United States. On the 70th anniversary of the Korean War, President Moon’s highest priority should be continuing and developing Korea’s great accomplishments and protecting the life and safety of our citizens.