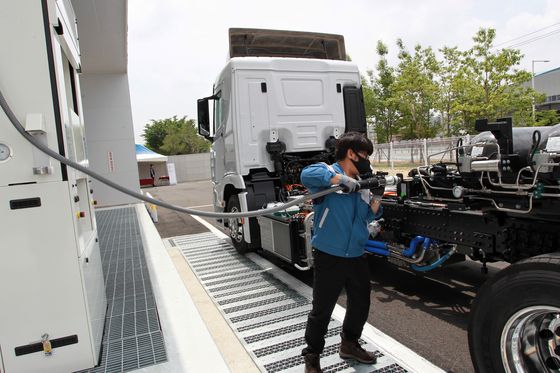 A truck filling up at a hydrogen station. [HYUNDAI MOTOR]


Gas bills will be cut an average 13.1 percent starting July 1 to help households and businesses during the coronavirus crisis.

This is the first change to gas rates since the government raised them 4.5 percent a year ago.

The Ministry of Trade, Industry and Energy on Monday said the price of one megajoule will be lowered from the current 15.24 won to 13.25 won.

Gas supplied to households will be lowered 11.2 percent.

For small businesses such as restaurants, gas bills will be lowered 12.7 percent, saving an average of 30,000 won a month.

For industrial use, gas rates will be lowered 15.3 percent.

According to the ministry, the decision came after crude energy prices fell.

As a result of that and the depreciation of the Korean won against the U.S. dollar, the import price of liquefied natural gas in April and May declined.

The government has also created a new price level for gas used for transportation as more vehicles use the fuel.

In March 2019, the government abolished a regulation limiting gas-fueled vehicles to taxis and for people with disabilities to boost the number of such vehicles amid concern over air pollution.

Additionally, the rising number of hydrogen-fueled vehicles has contributed to the growing number of such vehicles. Gas is used in making hydrogen fuel.

The ministry estimated that the amount of gas used by vehicles now amounts to over 900,000 tons annually.

Gas-powered vehicles will be charged 11.62 won per megajoule, 17.4 percent cheaper than the 14.08-won charged public buses.