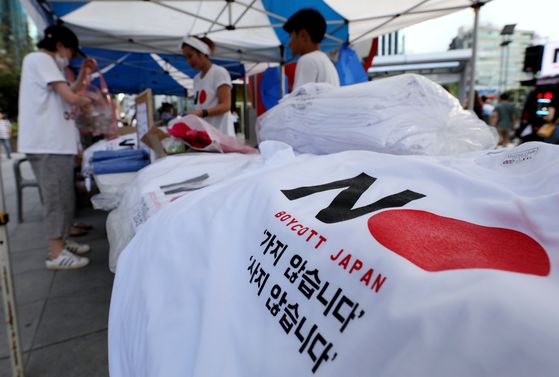 A "Boycott Japan" t-shirt is sold at a rally in Shinchon-dong, western Seoul, last August in retaliation to Japanese control measures imposed on key exports to Korea. [NEWS1]


The impact of a boycott movement against Japanese products that began in July 2019 is still visible in consumption patterns today, although some brands have shown signs of recovery.

The "No Japan" boycott began after Japan last year introduced controls on exports of some key products to Korea.

Consumer goods were the hardest hit. Japanese beer and cars, in particular, have seen sales drop dramatically, even as the boycott movement has waned in recent months.

According to Korea Customs Service data, imports from Japan in April were worth 297 billion won ($248 million), more than 30 percent less than the same month last year. The on-year decline has been visible throughout the year, with sales down 35.0 percent in January, 14.9 percent in February and 17.7 percent in March. 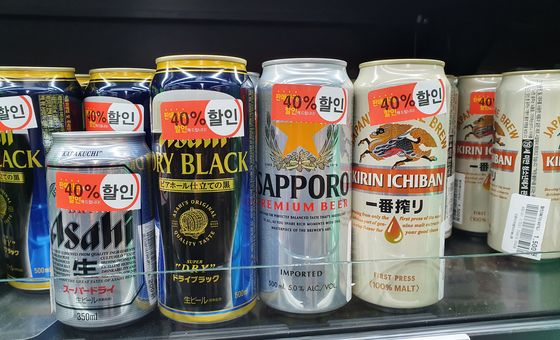 Japanese beer is heavily discounted at a store after sales plummeted following the trade dispute between Korea and Japan. [YONHAP]


For beer the drop has been much higher. In April, 755 million won of Japanese beer was imported, 88 percent less than last year. The boycott movement last year has led to an increase in the range of beer included in the popular four-for-10,000-won deal found in most convenience stores, likely reducing the chance of exports ever fully recovering.

Korea was Japan’s biggest export market for beer until 2018, but sales dramatically decreased following the trade spat between the neighboring countries. The boycott movement against Japanese goods has had a lasting impact this year, with sales of Japanese beer down 92.7 percent in February and 87.1 percent in March.

From January to May last year, 19,536 Japanese cars were sold in Korea. This year that figure fell to 7,308 — a 62.6 percent decline. The market share of Japanese cars in the imported car market decreased from 21.7 percent to 7.2 percent. 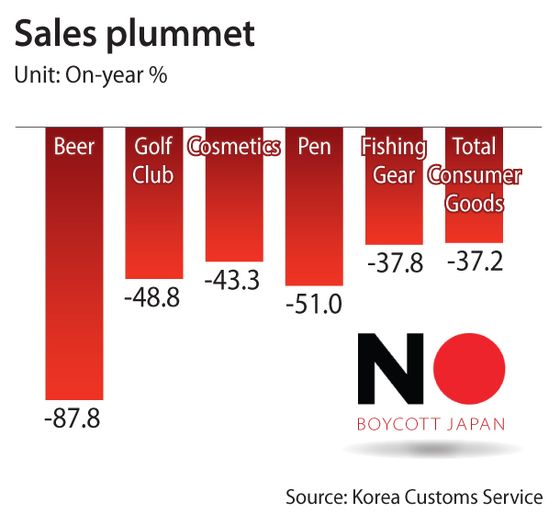 Nissan, a Yokohama, Japan-based automobile manufacturer, decided to shutter all of its businesses in Korea. The primary reason behind the decision was a global management crisis in the Renault-Nissan-Mitsubishi Alliance, but weak performance in Korea also influenced the move. Although Nissan’s premium car brand Infinity has some of Nissan’s best-selling cars like the Q50, sales still drastically decreased due to its diesel emissions scandal and the fallout from the anti-Japan boycott.

However, there have been some signs that may suggest the impact is lessening. Japanese luxury brand Lexus saw sales increase in May with the sale of 727 cars, 266 more than April. The figure is still down on last year, when it sold 1,431 vehicles in May, but does show an upturn.

“Lexus’ sales are recovering due to the brand’s positive reputation for its quality among consumers and the recent boost in promotions,” said an official in the imported car industry.

Meanwhile, some Japanese consumer goods brands like Descente, a sportswear company, ABC Mart, a footwear brand, and Muji, a retail company, have been opening more stores in Korea and seeing sales increase. Industry analysts say consumers still shy away from products that are conspicuously Japanese, like cars and beer, but have been returning to Japanese brands for daily supplies and personal items.

“Japanese companies’ exit from the Korean market is not entirely attributable to the boycott movement, but the momentum from the movement is likely to last under the Abe administration,” said Suh Yonh-gu, the dean of Sookmyung Business School. “It is true that measures like export controls are not beneficial for the economies of both nations.”