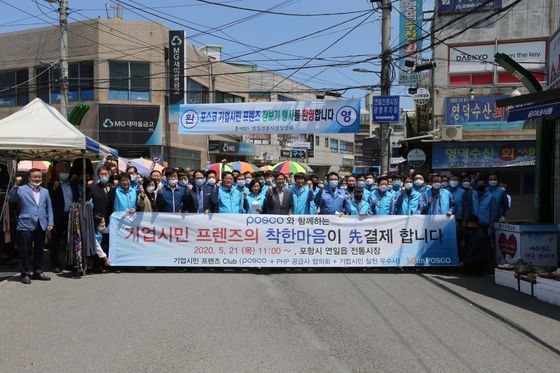 Posco, as a part of a social contribution campaign, made an advance payment to local traditional markets in order to revitalize the economy. [POSCO]


Posco is doing its utmost to revitalize the Korean economy. The unprecedented risks caused by the virus have left local communities in despair, but the company hopes to lessen their burden by actively participating in various events.

On May 21, Posco, with its 90 partner suppliers that provide equipment in Gwangyang, South Jeolla, and in Pohang, North Gyeongsang, made an advance payment to the local traditional markets. This was part of the government “good consumption” campaign, which encourages consumers to pay in advance to help local stores deal with the economic crisis.

About 165 employees from Posco Group and its partner companies participated in the event and the vouchers they received by making advance payments to the traditional markets were donated to socially vulnerable people.

Considering its importance, the event was also held on June 23. Posco wanted to share the significant meaning of the events with others, and possibly draw more companies in to participate.

Posco’s Corporate Citizen Friend Club has played a key role in making this event successful. In order to contribute to the local community, the company established a club with its partner companies last year.

Under the business philosophy of corporate citizenship, the club has participated in various social contribution activities to make society a better place to live.

Posco is also helping local farmers in Korea to effectively cope with the crisis.

The outbreak of the coronavirus pandemic has caused many schools to shut down and the farmers who mostly relied on supplying products to schools have faced severe consequences.

To support the farmers, Posco decided to purchase a significant amount of agricultural products that are left unsold. The company then created a basket containing the products they have bought and sold them to employees at relatively cheap prices.

The fresh quality of the products and affordable price proved popular, and a total of 600 baskets sold in just one day. Employees also visited Posco’s sister cities to purchase their regional products and help those in need.

Mirae Asset, IBK to team up on digital payments