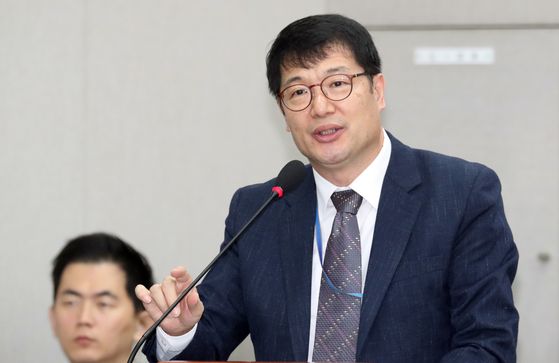 Hwang Deok-soon, President Moon Jae-in’s secretary for jobs, says converting contract workers at the Incheon International Airport does not affect jobs for those who aspire to work at the corporation. [NEWS1]

American philosopher John Rawls (1921-2002) is a scholar who studied the theme of justice for half a century. His 31-page paper titled “Justice as Fairness” in 1958 was the beginning. While it is a short paper, it contains the ideas of the theory of justice he continued to advocate.

Rawls considered justice a process of creating fair rules through social consensus. In order to fairly distribute a pizza, Rawls might say, people who cannot even smell the pizza should be given consideration. He argued that the least advantaged who cannot participate in the process of making the rules should be given the greatest benefits. A notable example is priority seating for pregnant women on subway cars in Seoul.

I paid attention to President Moon Jae-in’s inauguration speech in 2017. He said, “Opportunities should be equal, processes fair, and results just.” The address resembles Rawls’ theory on justice in terms of the keywords and narrative.

Moon’s inauguration speech has been challenged since the end of last year. From allegations against former justice minister Cho Kuk to the controversial offering of regular employment status to security guards at Incheon International Airport Corporation, his inauguration address has become a buzz topic. Rep. Ha Tae-kyung, an opposition lawmaker, argued that it would be fair if a public corporation gives extra points to contract workers when they want to become regular workers instead of converting their position to comply with the president’s order.

Let’s go back to Rawls’ theory of justice. Who is the least advantaged: an irregular employee working as a security guard receiving 35 million won ($29,167) a year or a young jobseeker? According to Statistic Korea’s employment report, real youth joblessness has reached 26.3 percent, the highest in five years. When given the statistics, Hwang said that the switch for contract workers to regular employment does not take away jobs from young people. It’s like saying there is no need to worry because another pizza is coming when actually there is no cheese to bake more pizzas. So I want to ask Moon: “Who is the least advantaged in Korean society, an irregular employee who makes 35 million own or a young job seeker?”