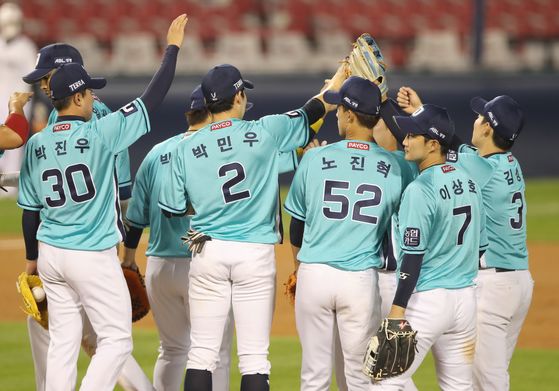 The NC Dinos celebrate after picking up a 9-3 win against the Doosan Bears at Jamsil Baseball Stadium in southern Seoul on Friday. [YONHAP]

It's official. Although the exact date hasn't been finalized, the KBO and other sports leagues in Korea will start allowing fans into stadiums in the near future.

The KBO is currently finalizing with the government the exact date that fans will return, but the clubs have already started their preparations. A source from one KBO club told the Korea JoongAng Daily on June 17 that they plan to first try operating at 15 percent capacity and then increase that to 30 percent capacity, and so on.

Two weeks ago that plan still looked like a pipe dream, but with the government giving the green light over the weekend, KBO clubs can now actually look at bringing fans back into stadiums.


Although the exact date is still unclear, some details have been released. All ticket sales will have to be made online using the credit card of the person attending, to ensure that clubs have the identification of attendees. Additionally, all fans will have their temperatures taken as they enter the stadium, and food and drink sales will be limited.

While the KBO looks like it's moving toward bringing fans back as quickly as possible, both the K League and the KLPGA Tour are taking a slower approach. The K League is planning to start opening up games in the second half of next month, while the KLPGA hasn't announced a specific date yet.

For now, fans are still absent, but that didn't stop another weekend of action for the KBO. 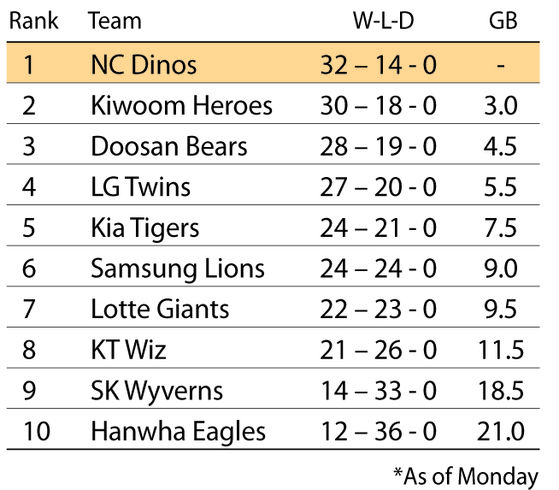 The LG Twins ended a tough week with a bit of a comeback. The Seoul club started off the month well, and by June 18 they were ranked second in the league -- just 1.5 games behind NC Dinos who came in first. After getting swept by the Doosan Bears and then by the Kiwoom Heroes throughout the week, the Twins went into the weekend with a seven-game losing streak.

On Saturday, starter Jeong Chan-heon tossed a complete game shutout against the SK Wyverns to break the slump, with the Twins picking up a 3-0 win. Throughout nine innings, Jeong gave up only three hits while striking out six.

Followed by Jeong, starter Im Chan-kyu tossed seven shutout innings on Sunday, leading the Twins to another 4-0 win. Im tossed seven innings and gave up three hits and a walk while striking out eight.

The Twins' bad luck might not be over just yet, however, as they are still missing quite a lot of players who used to be on their starting entry. At the beginning of the season, the Twins had to play without closer Go Woo-suk and outfielder Lee Hyung-jong, as they both got injured. Outfielder Chae Eun-seong has recently been added to the injury list.

Twins’ infielder Roberto Ramos also seems to have cooled down. Throughout the month of May, Ramos made headlines for his home run streak as he managed to hit 10 home runs, topping the league. At the time, there was talk that he could go on to set a new league record, but that no longer seems to be the case. Throughout the month of June, Ramos has only managed to hit three home runs.

Thanks to his performance in May, Ramos is still ranked second in home runs, followed by the KT Wiz’s Mel Rojas Jr. at 17.

The KT Wiz and the Hanwha Eagles also made headlines over the weekend as Hanwha infielder Song Kwang-min hit a 2-run blast in his 1,000th career game in the KBO. Despite Song’s home run, the Eagles still suffered a 4-8 loss to the Wiz. Thankfully, the Eagles avoided a weekend sweep by picking up a 7-4 win in their first game against the Wiz on Friday.


Over at Jamsil, NC Dinos’ starter Drew Rucinski tossed seven shutout innings against the Bears on Sunday. Throughout seven innings, Rucinski gave up four hits and two walks, while striking out six. The Bears avoided a weekend sweep with a big 12-3 win against the Dinos on Saturday.

At Gockeok Sky Dome, the Kiwoom Heroes managed to win their weekend series against the Kia Tigers. However, they weren’t able to sweep the series as the Tigers won Friday’s game 8-6. Down at Sajik, the Lotte Giants barely avoided a sweep against the Samsung Lions, picking up a 7-3 on Sunday. Two losses on Friday and Saturday led the Giants to move down a spot to seventh in the standing, overtaken by the Lions.

Starting tomorrow, the LG Twins will be heading back home to Jamsil Baseball Stadium in southern Seoul to play a three-game series against the Wiz. Over at Gocheok Sky Dome in western Seoul, the Heroes will be hosting the Bears. In Daegu, the Lions will host the Wyverns while the Dinos will host the Giants down in Changwon. In Gwangju, the Tigers will face the Eagles.