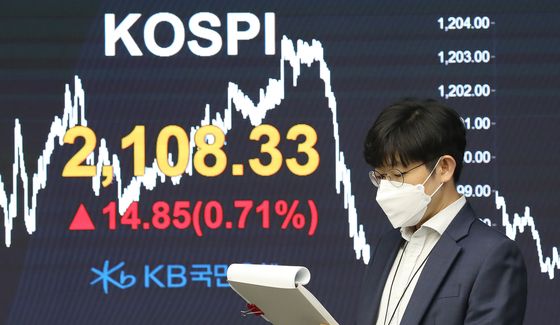 The final Kospi figure is displayed on a screen in a dealing room of KB Kookmin bank, located in the financial district of Yeouido, western Seoul, Tuesday. [NEWS1]


Stocks closed higher Tuesday as hopes of an economic recovery offset renewed concerns over political tensions between the world's two largest economies. The won fell against the dollar.

The index's rise was mostly attributed to hopes of a recovery, along with a counter-sentiment that followed a sharp fall in the previous session, according to an analyst.

"The Korean stocks are on a rebound in resistance to the large fall from the previous session, but the hike will be limited due to the growing [global economic] uncertainties," Kiwoom Securities analyst Seo Sang-young said.

The index got off to a strong start, thanks to a record gain in pending home sales in the U.S.

The local currency closed at 1,203.00 won against the dollar, down 4.40 won from the previous session's close.