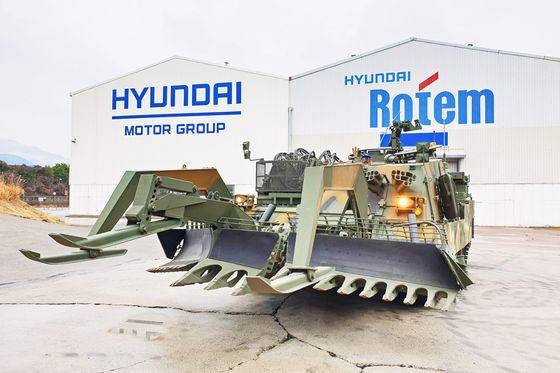 The Uiwang, Gyeonggi-based railway system and plant equipment maker will supply armored military vehicles designed to remove landmines and other obstacles through 2023.

Often used near the border with North Korea, the demining vehicle is fitted with a mine plow to uncover buried land mines and also designed to deactivate the magnetic trigger attached to landmines.

Besides its demining capability, the vehicle is also capable of breaking other obstacles with excavation tools.

The company said that the defense agency placed the order ahead of schedule, considering the difficulties facing the industry in the wake of the coronavirus pandemic.

Hyundai Rotem separately clinched a 63.2-billion-won contract with the procurement agency to modernize tanks used by the Korean military.

The series of orders follows a 174.6-billion-won contract signed last November to provide combat engineering vehicles to the agency, although it didn’t specify the number of devices to be delivered due to security concerns.

The defense equipment supplier vowed to diversify its portfolio to increase competitiveness.

“We look to strengthen competitiveness in the market by bringing a variety of defense vehicles,” a source at Hyundai Rotem said in a statement.