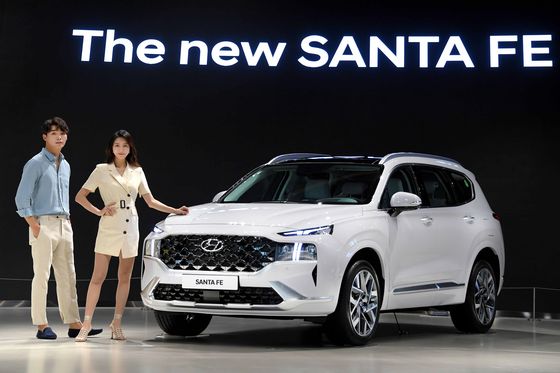 The automaker held an online event on Tuesday, introducing a partially revamped version of the fourth generation Santa Fe, which was launched in 2018.

The face-lift comes as Hyundai Motor struggles with weak sales amid the coronavirus pandemic.

One of the most noticeable changes are the sharper and slimmer headlamps, which have become a common design element for the company since the introduction of the Kona small SUV in 2017.

In contrast to the vehicle's slim headlights, the radiator grille has gotten wider, extending further to each side of the vehicle’s front, compared to the previous version.

Remote smart parking assist allows the vehicle to either go forward or go backward with a press of a button on the key with the driver standing outside. It is considered especially useful in Korea, where parking lots are cramped most of the time.

The diesel engine version will launch first in Korea on July 2 with upgraded fuel efficiency of 14.2 kilometers (8.8 miles) per liter, which is 4.4 percent more efficient compared to the previous model. Its price will start from 31.2 million won ($25,900).

Near the end of this year, Hyundai Motor said it will add a gasoline-powered model to the market.

“The new Santa Fe, with its enhanced safety and convenient functions, is expected to cater to customers who are thinking about buying a car for the family,” the company said in a release.