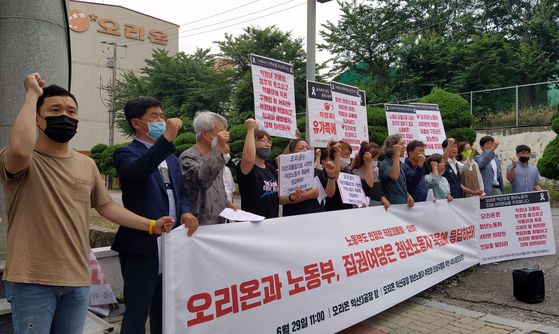 A group of people rally against workplace bullying in front of the Orion factory in Iksan, North Jeolla, on Monday. The group held a press event demanding Orion apologize to the bereaved and arrange measures to prevent similar incidents in the future. [YONHAP]

Orion expressed its condolences and regrets over the death of a young factory employee who committed suicide in March after the Ministry of Employment and Labor announced the death was linked to workplace bullying.

The late employee in her early 20s took her own life in March after two years of working at the Orion factory in Iksan, North Jeolla, citing workplace bullying including sexual harassment. She named the bullies in her will, which also included the quote “I truly hate Orion.”

“Orion and its entire employees express great condolences and regret for the death of an employee on March 17 who worked at the Iksan factory,” wrote Orion in a statement on Tuesday.

According to the statement, Orion “has been notified based on the investigation by the Ministry of Employment and Labor that the act of a senior colleague demanding an incident report from the deceased was workplace bullying. [The company] has also been recommended to improve the inflexible organizational culture at the Iksan factory.”

The late employee was told by a manager to write up an incident report taking the blame for mistakes that were not solely her fault, and was sexually harassed by senior colleagues, according to a report from Yonhap.

Orion said it will punish the manager that demanded the employee submit the incident report, as such a report can only be requested by headquarters. It will also follow the government advice about changing its inflexible culture.

The company says it plans to reinvestigate the case, while pointing out that the government didn't say that all of the reported incidents were workplace bullying.

“Orion learned there was a rigid culture at the factory and that there wasn’t anyone to reveal the pain [she] felt,” the company wrote. It said it is trying to improve the working environment and the culture.

“We sincerely express condolences to the deceased and the bereaved.”

According to local reports, colleagues bullied the victim and accused her of “flirting with senior colleagues.” She was dating an employee at Orion.