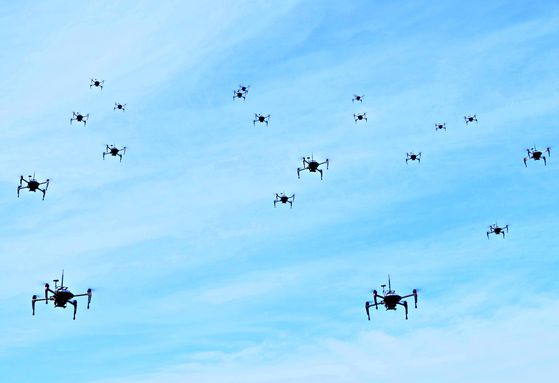 Dozens of military-use drones developed by the Agency for Defense Development are flown during a test in March. [PARK YONG-HAN]

The acquisition of new systems has previously required extensive testing and verification steps, which at times delayed the process to the extent that items would become obsolete by the time they were put to use.


The main agenda concerned measures to improve a new project introduced by DAPA in May regarding a process to rapidly acquire and implement new weapons systems.

The new system streamlines the purchasing process to obtain cutting-edge systems including artificial intelligence (AI), drones and other unmanned vehicles.

The Defense Ministry believes the new system will be able to cut down the time frame for acquiring products developed by civilian companies by more than five years.


The system is set to receive 30 billion won ($25 million) and is scheduled to be implemented later this year.

According to the press release from DAPA, the first products to be acquired using the new process include an aerial drone for maritime surveillance use, a fixed-wing flight drone to guide artillery targeting and an anti-drone gun.

Korea is also investing heavily in research and development into so-called “fourth industrial revolution” technologies applicable for military use amid an evolving regional and global security environment.

One of the projects, which translates to “Future Challenge Technology Development,” is designed to be a research platform to speed up the application of civilian-developed technologies for military use. The project has received an allocation of 58 billion won in the national defense budget for 2020.

Another project, called “Leading Core Technologies Development,” is meant to empower the ADD — the main government institute for weapons development — to independently develop modern weaponry. Around 66 billion won is set to be invested this year toward the project.


“Through the regular use of task forces [on the streamlined acquisition process], we will actively respond to security threats on all fronts and continue to advance our defense acquisition system to allow for a timely implementation of fourth industrial revolution technology to our defense,” said a Defense Ministry official.

A dangerous test for soldiers