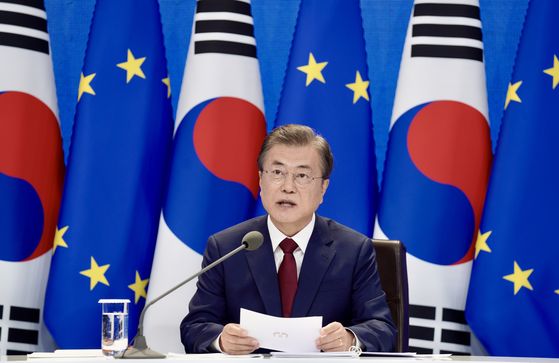 President Moon Jae-in speaks on North Korea to European Union leaders in a virtual summit at the Blue House on Tuesday. [YONHAP]

Speaking in a videoconference summit with European Union leaders on Tuesday, Moon said, “Korea believes that there is a need for another effort toward dialogue between North Korea and the United States ahead of the U.S. presidential elections” on Nov. 3.

A Blue House official said Wednesday that such talks should be in the form of a third North-U.S. summit.

Kim and Trump held two summits, in June 2018 and February 2019, and a third impromptu meeting in the demilitarized zone (DMZ) at the inter-Korean border in June 2019.

According to the official, the Blue House is “in close communication” with the White House National Security Council and has conveyed such thoughts to Washington. He added that the United States agrees on this matter and is “making efforts” toward this end.

North Korean leader Kim Jong-un called off threats of military action against Seoul last week in a deescalation of recent tensions on the peninsula, which were brought to a recent high by Pyongyang’s demolition of the inter-Korean liaison office at Kaesong on June 16.

In the virtual summit with EU Council President Charles Michel and European Commission President Ursula von der Leyen, Moon relayed his “firm determination that the progress made in inter-Korean relations should not be reverted backwards.”

The Blue House official said that Moon stated that he will “with patience work towards maintaining the momentum of dialogue” between the two Koreas and the United States.

Moon also thanked the two EU leaders for their encouragement of South Korean efforts and their “consistent support for South-North-U.S. dialogue and our government’s Korean Peninsula peace process initiatives.”

A joint press statement after the virtual summit stated that the European Union supported Seoul’s efforts to engage with Pyongyang “to achieve peace and prosperity on the Korean Peninsula.”

John Bolton, Trump’s hawkish former national security adviser, portrayed Seoul as a third wheel in the Kim-Trump talks in his newly published memoir, “The Room Where It Happened.” The Blue House shot back at the book, saying that it didn’t portray accurately Seoul's role in the diplomacy between Pyongyang and Washington.

Moon’s remarks came ahead of a possible visit by Stephen Biegun, the U.S. deputy secretary of state and special representative for North Korea, to Seoul this month. The two sides are working on arranging that visit as early as next week, according to diplomatic sources, though the U.S. State Department and South Korean Ministry of Foreign Affairs have not officially confirmed the trip.

A visit to the region by Biegun has led to speculation that he may try to make contact with North Korea during the trip.

Japan’s Yomiuri Shimbun reported Wednesday that Biegun will try to deliver a message from Trump to North Korea. It added that Biegun is expected to attempt to meet with North Korean officials in the truce village of Panmunjom at the DMZ through Seoul’s mediation.

In a virtual forum hosted by the German Marshall Fund Monday, Biegun said that a third Kim-Trump summit is “probably unlikely between now and the U.S. elections.” But he stressed that “if the North Koreans would engage with us in negotiation, we can make progress very quickly.”

“The United States wants to see North Korea achieve a bright economic future under Chairman Kim’s leadership,” O'Brien said in a virtual webinar hosted by the Washington-based Center for the National Interest marking the 70th anniversary of the start of the three-year Korean War on June 25, 1950.

“Tangible progress has been slow, but the door to dialogue and progress remains open,” said O'Brien. “We are committed to engagement, and to achieving the goals set forth at the Singapore summit: transforming relations between the United States and North Korea, healing the wounds of war, complete denuclearization on the Korean Peninsula and securing a lasting and stable peace for the Korean people.”

He went onto call on North Korea to “avoid provocations, abide by obligations under UN Security Council resolutions and return to sustained and substantive negotiations.”

O'Brien said, “Since the beginning of his term, President Trump has made the Korean Peninsula a priority for his administration and worked to deepen the ties we have with our Korean friends.”

He recounted that in the past three years Trump has “welcomed” President Moon to the White House three times and also traveled to Seoul twice. The two leaders “talk on the phone often,” he added.

O’Brien’s remarks offer a contrast to that of his predecessor, Bolton, who expressed extreme skepticism at the denuclearization negotiations with Pyongyang.

During the webinar, O'Brien appeared to allude to the difficulties faced by Seoul and Washington in renewing their defense cost-sharing negotiations after the previous deal expired at the end of last year.

“From time to time there will undoubtedly be economic and defense issues between our two nations that require tough negotiations,” said O’Brien. “But they'll be resolved, and we'll get through them and emerge stronger as a result. It is always so with close friends and family.”

Washington has been pressuring Seoul to pay much more under their bilateral Special Measures Agreement (SMA) for the upkeep of some 28,500 U.S. troops stationed in Korea.

O'Brien referred to the Seoul-Washington alliance as the “the linchpin of peace and security not only on the Korean Peninsula but the entire Indo-Pacific region.”

Achieving denuclearization of North Korea is not the only challenge faced by the two allies, he noted.

“We are also working hand in hand to ensure a future for the Indo-Pacific that is free and open, one where sovereignty is respected, conflicts are resolved peacefully and individuals are able to prosper and flourish,” he said.

His remarks seemed to be directed toward Beijing amid intensified Sino-U.S. tensions over trade, coronavirus blame and most recently China’s new national security law on Hong Kong imposed Tuesday.

“We have also learned from South Korea most recently as our two nations have collaborated to combat this global pandemic,” he said, sharing research and ensuring a free flow of essential supplies to frontline medical workers fighting to contain the new coronavirus.

He continued, “Our close cooperation continues to demonstrate how free and open societies, operating transparently, can deal effectively with this threat.”

O’Brien said that Seoul showed “leadership in global trade reform” by giving up its status as a developing country at the World Trade Organization, then specifically called out China for unfair trade practices.

He said, “When the wealthiest economies such as China unfairly claim developing country status, they harm not only other developed economies but also economies that are truly underdeveloped and require differential treatment.” 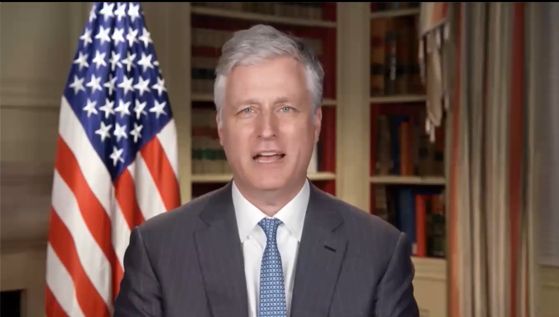