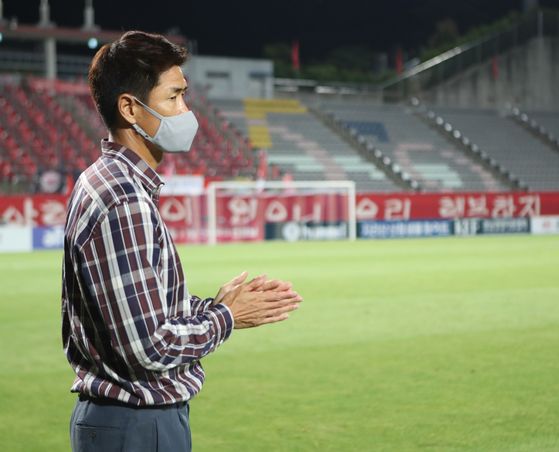 K League 2 side Gyeongnam FC still has an uphill struggle ahead of it, but under new head coach Seol Ki-hyeon, the club is seeing steady progress.

After Gyeongnam played to a 2-2 draw against Seoul E-Land FC on May 17, head coach Seol complimented his players, rather than pointing out the areas they need to work on. Although it was the team's second-straight draw since the season opener, he emphasized areas the team did well on, rather than the areas it struggled with.

The following day when the players came out to the pitch to train, they worked harder. They would slide like the were in an actual match, and, repaying Seol’s trust, Gyeongnam finally picked up a 3-2 win against FC Anyang on May 24. This was Seol’s first win as head coach of a K League club.

Throughout eight matches so far this season, Gyeongnam has picked up two wins, but it's only lost once and picked up five draws, totaling 11 points. The team is ranked sixth in the K League 2 table, only four points behind leader Suwon FC.

Following the win against FC Anyang, Gyeongnam went from strength to strength, playing another 1-1 draw against Jeju United, considered the favorites to win the K League 2 this season. The draw ended Jeju’s five-game winning streak.

“When I was preparing for the season, I thought I was doing enough, but I really wasn’t,” Seol said. “I had a rough debut as a head coach in the pros. I was getting angry at myself. But on the other side, our players’ performance was consistently getting better, so that was something to celebrate.”

Back when Seol was a professional player in the early 2000s, he was one of Korea’s dominant wingers, standing tall at 1.87 meters (6 foot, 1 inch). To the Korean football fans, he is known as the player that scored an equalizer in the round 16 match against Italy during the 2002 FIFA World Cup.

When Seol retired in 2015, he managed the football team at Sungkyunkwan University, and this season he joined the K League, taking the helm at Gyeongnam.

With Seol’s experience playing in Europe, he’s been taking a different approach in terms of leadership. Rather than making them specifically train at a specific time, Seol let his players realize that they are now pros and they need to do the work themselves.

“I don’t really tell them to do weight training,” Seol said. “If they’re pros, then they need to make their own time to build up their physical strength. That’s how they all do it in Europe.”

Along with individual weight training, Gyeongnam players no longer stay together in a dormitory. As strange as it may seem for professional athletes to be housed together, in the K League this is standard — and moving against that tradition was an unconventional choice.

“It’s ineffective to stay at a dormitory while they have comfortable homes,” Seol said. “It’s better to play in matches while their family cheer for them. Back when I played in Europe, the thought of scoring just one more goal came up automatically when I saw my wife.”

More than anything, Seol emphasizes communication with his players. Recently, he appeared on JTBC’s variety show “The Gentleman’s Show.” Despite being a legendary Korean football player, he made quite a scene by missing a penalty kick.

“After [the show] went out, our players laughed at me,” Seol said. “I gave up my authority as head coach and told the players that penalty kicks are all about confidence. I told them not to do it like I did.”

Seol might seem like a friendly coach, but he doesn't have time for players slacking off. In terms of Seol’s coaching style, he said that he is heavily influenced by Guus Hiddink, who coached the Korean national football team for the 2002 FIFA World Cup.

“Head coach Hiddink dominated the players with his leadership,” Seol said. “He knew how to motivate the players to play better. Using that, he pushed us.”

Just like Seol’s football career, where he started from the bottom and worked his way up to the top, he also dreams of leading Gyeongnam to the top. In 2000, back when Seol was attending Kwangwoon University, he headed to Belgium to play for Royal Antwerp, from 2000 to 2001, and Anderlecht, from 2001 to 2004.

Then, he headed to Britain to play for the Wolverhaptom Wanderers, before finally reaching the English Premier League with Reading in 2006.

“I was continuously challenged throughout my football career,” Seol said. “I always survived and know how to reach a higher point. Gyeongnam is similar to me. Our goal is to play fun and dominant football with teamwork. I never forgot about our goal of getting promoted to the top flight. Once Seol Ki-hyun’s approach to football teamwork sticks, the results will follow along.”

Gyeongnam will continue its season with a match against Chungnam Asan at Asan Yi Soon-sin Stadium on July 5, starting at 7 p.m.