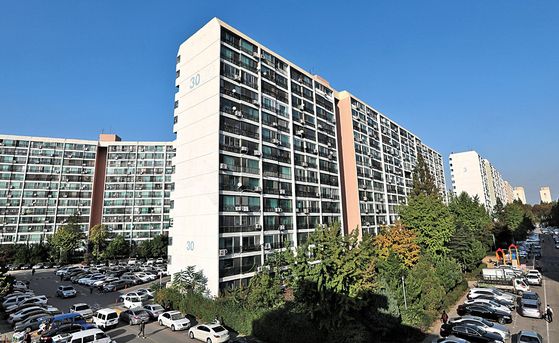 
The government’s most recent real estate policy, the 21st antispeculative measures instituted by the current administration, has posed challenges to home owners and so-called gap investors.

The Eunma Apartment Complex in Daechi-dong of Gangnam District, southern Seoul, was built in 1979 and has been the target of the government’s real estate policy due to its position as a price leader in the housing market for being the first in line for reconstruction in the area.

Real estate measures released on June 17 tightened lending rules and designated more areas subject to tighter regulations in order to prevent a further rise in housing prices in Seoul. The most recent set of measures stipulates that ownership of new homes after reconstruction will not be granted to those who have not lived for at least two years in their properties.

The Eunma Apartment Complex has not formed an association, and hence there is a chance that it will be the first complex to be subject to the regulations, which are set to be passed by the National Assembly.

Assuming a current market price of 2 billion won ($1.67 million) per unit, the market value for the entire complex would be 8.8 trillion won.

Real estate transactions in the complex are only allowed for property owners who plan to live in their houses for at least two years.

The average turnover of apartments in Seoul is just about 5 percent a year, and the rate of transactions in the Eunma Apartment Complex is less than average. Turnover there is not especially rapid.

An investigation into registration documents filed for 224 Eunma apartment units, 5 percent of total, shows that the registered homeowner for 21.4 percent, or 43 units in the complex, have not changed for over 20 years.

The investigation found that 40 percent belonged to the same owners for more than 15 years. The prolonged ownership may be due to expectations for reconstruction since 2000. The average age for the homeowners was 58. About 4 percent of homeowners were in their 30s.

More than half of the property owners lived in the three main Gangnam districts: Gangnam, Seocho and Songpa.

Eight percent of those who purchased Eunma apartment units were from outside of Seoul. Half of all transactions were communal, with the units owned by more than two people — for every 44 units sold since 2017, 70 percent were under joint ownership.

Joint ownership has emerged as a popular option after the Moon administration ramped up real estate taxes.

Among transactions made after 2017, the real addresses of the homeowners were the same as the address of the owned apartment for 11.4 percent of the total. Some of the real addresses are abroad, and some of the registered owners have acquired citizenship elsewhere. For these people, ownership of the reconstructed residencies does not seem plausible under the two-year requirement.

As a result, a significant portion, an estimated 88.6 percent, are likely to be so-called gap investors — purchasing homes with lump-sum jeonse rent deposits nearly equal to the market prices of the units and selling them when values rise.

For Eunma, this type of gap investment puts a lot of burden on the owners.

After the implementation of last year’s Dec. 16 real estate policy, buyers cannot get mortgages for houses costing more 1.5 billion won. For an Eunma apartment unit of 76 square meters (818 square feet), the market price is 1.9 billion won, whereas the jeonse, or the long-term housing rental deposit, is in the 500 million-won range.

More than 75 percent of Eunma homeowners, or at least 3,318 households, need to agree on reconstruction if they want to request approval.

Whether Eunma will be able to speed up its reconstruction project before the real estate policies get any stricter will likely be the subject of attention in the near future.