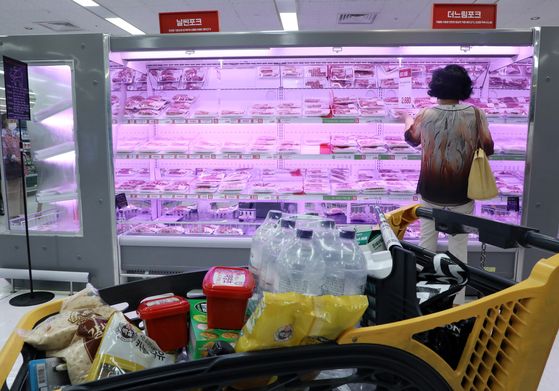 A shopper in front of the meat section at a discount mart in Seoul on Thursday. While the consumer price was flat in June, meat prices went up thanks to the emergency relief grant. Pork prices were up more than 16 percent while Korean beef went up 10 percent. [YONHAP]


Inflation was essentially flat last month, with the government giving itself a gimme because the number was close enough to zero.

Government relief grants helped save the country from another month of deflation. Consumers used much of the free money to buy food, which helped to keep prices firmer than they might have otherwise been.

The better number in June was in part the result of higher food prices.

“Pork and Korean beef prices rose sharply, while prices of furniture among durable goods such as sofas and dining tables went up,” said Ahn Hyung-joon, head of the short-term economic statistics at the statistics agency.

Agriculture and fish product prices were up 4.6 percent year-on-year, higher than the 3.1 percent rise in May.

Food prices have been rising as more people have been cooking at home while avoiding eating out at restaurants and practicing social distancing due to the coronavirus pandemic.

A sharp fall in energy prices weighed on the inflation statistic, as did government policies such as the support for high school tuition.

“The continuing social distancing, which affected eating out prices, was the main reason for the slow increase of individual service [prices],” said Statistics Korea’s official Ahn.

“The emergency relief grant partially affected the consumer price,” Ahn added. “However, its influence was limited.”

Restaurant consumer price on year only increased 0.6 percent. A month ago, the statistic agency had expected the emergency relief grants to contribute to rising inflation in June.

The government in mid-May granted a maximum 1 million won ($830) to every household in hopes of boosting spending, supporting economic growth and preventing a recession.

According to the Ministry of Interior and Safety on Thursday, as of June 14, 82.4 percent of the 9.62 trillion won -- or 7.93 trillion won -- of the emergency money distributed through credit and debit cards had been spent.

Core inflation, which excludes volatile seasonal factors, such as agriculture and energy prices, has remained below 1 percent for 16 consecutive months.

A week ago, Bank of Korea Gov. Lee Ju-yeol projected Korea to continue to experience low inflation due to the “unprecedented” global crisis. Bank of Korea forecasts 0.3 percent inflation this year and 1.1 percent for next year, far below the central bank’s target of 2 percent.

The governor said while the economy will gradually improve next year, it will take some time to hit the 2 percent target.

Signs of the worst having passed have been noted. During the government’s economic emergency meeting, Finance Minister Hong Nam-ki said several recent economic indicators suggest a return to normal.

“Recently there have been some sparks of economic recovery,” Hong said during the meeting on Thursday, citing the increase in consumer spending in April and May as well as the slowing decline of exports.

Exports in June declined 10.9 percent. This was an improvement from the two previous months, where the number declined more than 20 percent. Hong also noted the 9.5 percent increase in exports to China.

“Manufacturing and mining output in April and May fell 6.7 percent both months, and daily average exports have shrunk 18 percent, which is a difficult and serious situation,” Hong said. “The Covid-19 situation could get worse as the number of confirmed cases in the world has exceeded 10 million, with several countries possibly rolling back on opening their economy.”

He again urged the National Assembly to pass the third supplementary budget, citing its importance in swiftly executing government policies that will keep the economy from contracting

“We will do everything to turn the economy to plus growth in the second half,” Hong said.