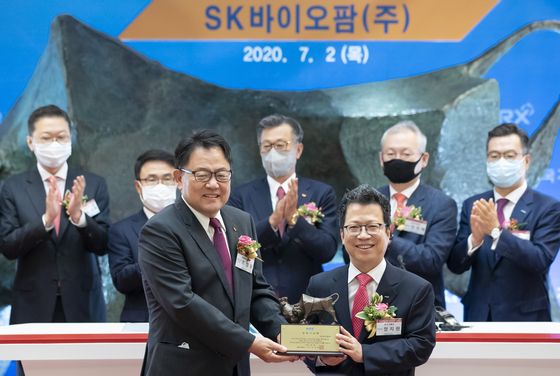 
SK Biopharmaceuticals rose 160 percent from its offer price on its first day of trade, hitting two stock exchange-imposed limits on the way up.

By market capitalization, it is now Korea's 27th largest company, just ahead of Amorepacific and just behind LG Electronics.

Cho Jeong-woo, CEO of the company, said Thursday prior to the listing that he felt like he was “dreaming” and pledged to make the company a global leader.

The subsidiary of SK Holdings debuted strong on the Korea Exchange Thursday. It opened at 98,000 won ($82), double its 49,000 won initial public offering (IPO) price and at the 200 percent limit set by the Korea Exchange for the first trades of listed stock.

Within the first seconds of trading after that, the stock went straight to 127,000 won, bumping up against the 30 percent daily price movement limit. It closed at that level.

At the end of the company's first trading day, its market capitalization was 9.9 trillion won. Even when the market closed, 21 million orders were waiting in the queue to buy at 127,000 won whenever there are willing sellers at that price.

Trade volume was light, with 630,000 shares worth 80.6 billion won changing hands, as most of the investors with the stock held onto their shares expecting a further increase, Korea Exchange data showed. Retail investors purchased 47.9 billion won and institutional investors 1 billion won. Foreign investors sold 47.9-billion-won worth of the newly listed company, according to local brokerage firm Mirae Asset Daewoo.

The strong opening did not come as much of a surprise, as the IPO was over subscribed by 323.02 times, with 31 trillion won placed in deposit by investors seeking the shares. Both numbers were records.

To get a single share, an investor would have to have put 7.9 million won on deposit.

SK Biopharmaceuticals has two Food and Drug Association (FDA) approved drugs: sleep-disorder drug solriamfetol and partial onset seizure treatment cenobamate. Sales in the United States of cenobamate began in May after obtaining the approval last year. It is the first treatment to be developed, tested and distributed in the United States by a Korean company without a supporting partner.

Analysts were confident about the company's prospects in the short term, though some caution was advised as companies can overshoot when initial demand is so high.

“In terms of supply and demand, there are no big bio and health care-related players in the market at the moment aside from Celltrion and Samsung BioLogics,” said Seo Keun-hee, an analyst at Samsung Securities. “For institutional investors, the introduction of SK Biopharm is a nice opportunity to expand their portfolio."

Jung Yong-taek, an analyst at IBK Securities, said investors should be "cautious of market volatility because the current high liquidity in the stock market could lead to extreme overvaluation."