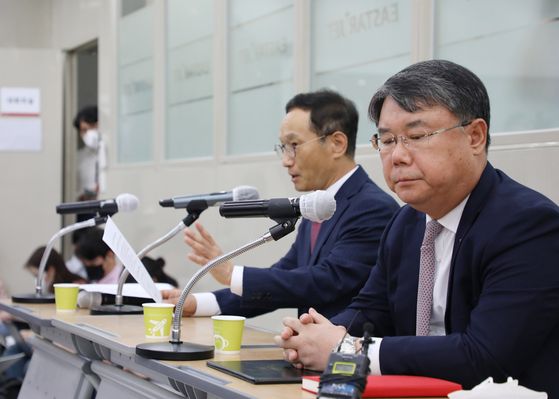 
Jeju Air warned Eastar Jet that its acquisition could be scrapped if it fails to meet the conditions in the agreement signed in March.

Jeju Air confirmed Thursday it sent an official document to troubled Eastar Jet on Wednesday demanding it resolve certain issues within 10 working days or it has the right to cancel the acquisition.

Eastar Jet is estimated to need at least 80 billion won ($71.5 million) to meet those conditions, according to local media reports. Jeju Air refused to spell out details of the conditions and the amount it would cost Eastar Jet to meet them. Eastar couldn’t be contacted.

Jeju Air’s statement followed Eastar Jet’s urging of it to accelerate the acquisition.

Eastar Jet CEO Choi Jong-gu held a press event Monday to say Jeju Air should “hurry the merger and acquisition deal with sincerity.” He implied Jeju Air was partly to blame for Eastar Jet’s financial struggles as it was excluded from government aid for the airline industry because of the acquisition.

When asked about a possible scrapping of the deal, Kim said, “We hope that doesn’t happen.”

CEO Choi said during the press event that the acquisition is “the only answer for survival.”

Why does he represent a company?