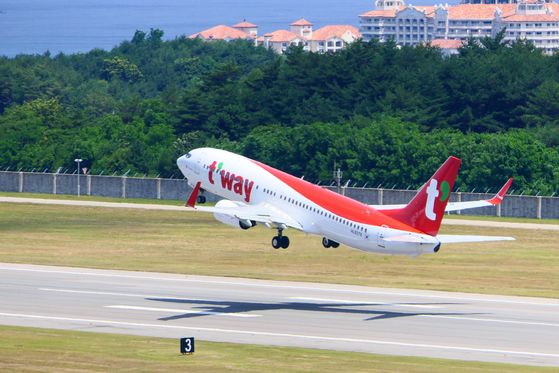 The budget airline announced on Thursday that it is reopening its Ho Chi Minh City, Vietnam and Hong Kong services on July 22, flying routes twice a week. On the Vietnam route, travel will only be offered in one direction: to Incheon.

The airline halted all international flights in March due to Covid-19 travel restrictions, though it did make three trips to Bishkek, Kyrgyzstan to repatriate Koreans.

Services will be resumed first to places often visited by Koreans for work and study.

In February, T’way Air secured the rights to operate services to Sydney, Australia and Bishkek, making it the first Korean airline to fly regularly to Kyrgyzstan. In May, it won the right to serve Zagreb, Croatia.

The airline operates eight domestic routes, including Gimpo-Gwangju and Busan-Yangyang.

We will “do our best for safe aviation by committing to strict in-flight quarantine and taking preventive measures,” the airline said in a statement. It “plans to gradually expand the operation of overseas routes following the travel restrictions of each country.”