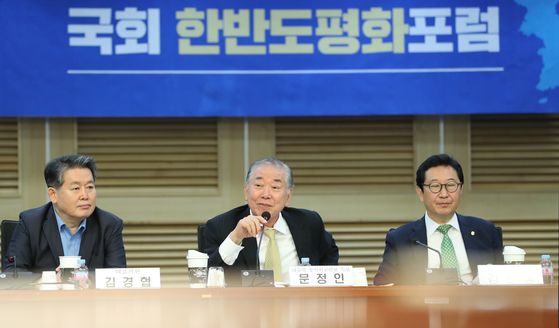 Moon Chung-in, a presidential special advisor on diplomatic and security affairs, center, speaks at a conference at the National Assembly on Thursday. [YONHAP]

“The White House is a circus in the way it makes decisions,” Moon Chung-in, presidential special adviser for diplomatic and security affairs, said in a lecture delivered at Seoul’s National Assembly on Thursday.

“Bureaucrats try to manage the situation stably, but people like Bolton are turning it into a mess by upending official positions using their prerogatives.”

The remarks from Moon Chung-in — whose unfettered criticism of U.S. foreign policy caused friction with Washington on several past occasions — were the sharpest attacks to emerge from South Korea’s leadership against the Trump administration’s handling of negotiations with Pyongyang as described in Bolton’s recent tell-all memoir, “The Room Where It Happened.”

Moon Chung-in was particularly critical of Bolton, who he described as a “paranoia patient” and a “primary instigator behind a second North Korean nuclear crisis” — a reference to Bolton’s role in pushing for highly punitive sanctions against Pyongyang after its first nuclear test in 2006.

Bolton’s controversial book, released on June 22 despite the Trump administration’s attempts to block its publication, shocked officials in Seoul with its compromising descriptions of President Moon’s keen endorsement of a nuclear settlement between the United States and North Korea.

Bolton made no secret of his disdain for dialogue with the North as well as Seoul’s role in the process, calling the flurry of summits between Trump and North Korean leader Kim Jong-un a “diplomatic fandango” orchestrated by Moon Jae-in’s “schizophrenic” ideas of peace with Pyongyang.

In contrast, the former White House security advisor fawned over Japanese Prime Minister Shinzo Abe, whose hard-line approach to Pyongyang was described as matching his own.

Identifying Abe as Bolton’s “biggest ally” in the affair, Moon Chung-in slammed the Japanese leader for repeatedly attempting to disrupt diplomacy between the two Koreas and the United States. In his book, Bolton seemed to aim his greatest dislike at President Moon Jae-in, the advisor added.

Moon Chung-in, who is also professor emeritus at Yonsei University, echoed President Moon and other top foreign policy officials in Seoul by calling for South Korea to take the initiative to realize another summit between North Korea and the United States.

“Strategists observe that China is rapidly rising, so North Korea needs to be pulled towards the United States,” Moon Chung-in reportedly said. “I believe this could present another opportunity.”

Regarding calls for Seoul to respond to North Korea’s growing bellicosity by proceeding with combined military exercises with the United States in August, the adviser said some sort of explanation should be relayed to Pyongyang to prevent tensions from growing further.