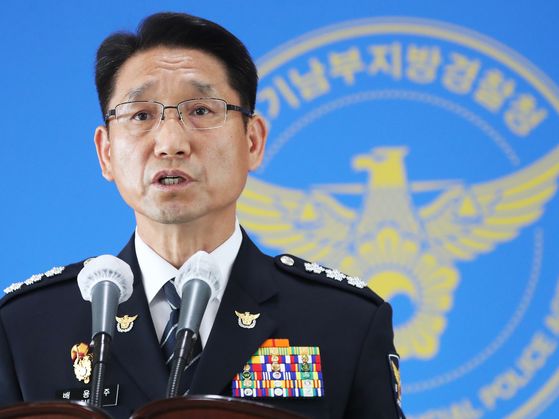 Bae Yong-ju, chief of the Gyeonggi Nambu Provincial Police Agency, announces the results of a year-long reinvestigation into the murders committed by Lee Choon-jae at police headquarters in Suwon, Gyeonggi, on Thursday. [YONHAP]


Police on Thursday wrapped up a year-long reinvestigation of one of Korea’s most notorious serial murders, concluding that Lee Choon-jae was responsible for killing 14 women and raping nine others throughout the 1980s and 90s.

The results of the probe announced by the Gyeonggi Nambu Provincial Police Agency on Thursday cannot be used to further punish Lee, who is already serving a life sentence at the Busan Penitentiary for killing his ex-wife’s sister in 1994, but they clear up one of the most mysterious cold cases in Korean history.

In the past year, Lee confessed to murdering 11 women in Hwaseong, Gyeonggi, ranging from the ages of 13 to 72 from 1986 to 1991, and also admitted to three other previously unattributed killings of women that occurred in Cheongju, North Chungcheong and Suwon, Gyeonggi, said Gyeonggi Nambu’s police chief, Bae Yong-ju.

Most of the victims were raped before they were killed, while nine other women were raped by Lee but not killed.

“[Lee] was unable to empathize with the pain and suffering of the victims and exhibited psychopathic behavior in the way he brandished his crimes in order to gain press and public attention,” Bae said.

“To sum up our investigation, we can say the motive behind Lee Choon-jae’s crimes was to satisfy his urges and unleash his latent [sexual] frustration.”

At the time of the Hwaseong murders, which terrorized the Korean public and left a deep imprint on society, police mounted an extensive manhunt that looked into hundreds of potential suspects but ultimately failed to discover the killer.

But the eighth killing, that of a 13-year-old girl in 1988, was erroneously believed to be a copycat killing and attributed to a young local man surnamed Yoon, who was later sentenced to life imprisonment for the act.

It was only in September 2019 when a new form of DNA analysis was used to trace genetic material found on several pieces of old evidence back to Lee, who had already been in prison for over two decades.

After initially denying the murders, Lee confessed to his crimes over the course of subsequent weeks, providing details that only the true killer could have known.

Surprisingly, he admitted to four other murders and 34 rapes that were initially not associated with the serial killings of nine Hwaseong women or the murder of the 13-year-old pinned on Yoon. Only nine of the rape cases were conclusively proven, however, as the other 25 lacked sufficient evidence, Bae added.

Until 2015, all felony cases in Korea had a statute of limitations of 15 years. This number was extended to 25 years in 2007 and eventually eliminated altogether for crimes like murder in 2015 -- but the changes cannot be applied retroactively to past crimes.

Lee's penultimate murder - that took place before the one he was convicted for - occurred in 1991, which means he could not be charged with the crimes after 2006.

Bae also delivered a formal apology to Yoon, who served 20 years before being released on parole in 2009, acknowledging that he had been falsely accused and punished for a crime he did not commit.

Yoon last year filed for a retrial of his case to obtain an official exoneration, which is still ongoing. He also called to punish police officers who allegedly tortured him into giving a false confession. Police booked nine police officers and a prosecutor responsible for Yoon’s conviction for abusing their powers, but eventually handed the case to prosecutors without a recommendation for indictment, as the statute of limitations had expired.

“We will leave records of the entire investigation as well as the wrongdoings that emerged in the process as historic reminders that can help us become a more responsible investigative body,” Bae said.