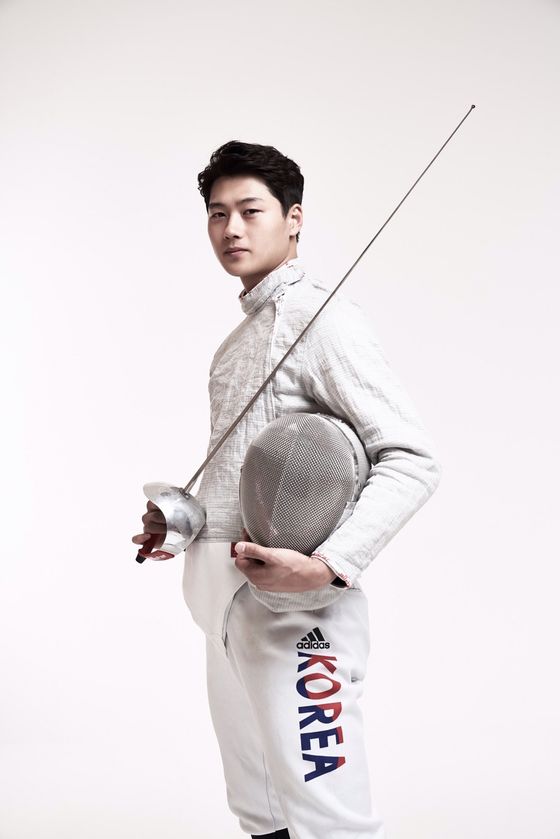 Fencer Oh Sang-uk strives to be anything but perfect.

Before the 2018 Asian Games, Oh used to think being the best in his sport meant being flawless, but he's since learned that pushing for perfection only holds him back. Accepting that he's going to make mistakes completely changed Oh's game, propelling him to the No. 1 spot, making him the best men's sabre fencer in the world right now.

Oh, perhaps unsurprisingly for a man who has made a career out of avoiding being stabbed with a sword, appears to take everything in his stride. Being the absolute best in the world, he says, "feels the same."

Standing at 1.92 meters (6 foot, 3 inches), Oh's height gives him the reach he needs to excel on the piste. In addition to his height, his speed and power combined allowed Oh to reach the No. 1 spot. That triple threat also earned him the nickname "Monster," although Oh personally thinks his height is really what gives him the edge.

Having made his debut on the International Fencing Federation circuit in 2015 at the World Cup in Padua, Italy, Oh already has a crowded trophy cabinet, with gold medals ranging from the world championships to the grand prix.


But one thing the 23-year-old doesn’t have is an Olympic medal.


Oh was 11 when he first saw a fencing sword.

Oh followed his brother, who is two years older than him. He thought fencing looked cool, so decided learn it alongside his brother. At the time, Oh’s first love was football.

“When I first saw it, I just thought it looked cool,” Oh says. “They told me to learn it along [with my brother], and that was so fun. It felt like [the sport was] aggressive but fancy, so I think I fell for that.”

Despite his love for football, Oh could only play at certain times of the year, with the cold winters and hot summers preventing him from hitting the pitch as much as he wanted. But fencing is an indoor game, so the club was open year-round. After following his brother to the club for a while, one day Oh was offered a chance to play in a match. That changed everything.

“I played, and it was so fun that I completely forgot about football,” Oh says. “I competed against players older than me, and I still won. As I kept winning, the coaches there asked me to start fencing properly. So that’s how I started.”

When Oh told his parents that he wanted to pursue a career in fencing, they didn't think he was being realistic. Oh's dogged persistence eventually wore them down.

There are three different events in fencing — sabre, épée and foil — and Oh chose sabre because that was the only team his school had. He learned about the existence of the other two events as he started competing.

“In sabre, you can hit the upper body including the head and arms,” Oh says. “We can either stab or cut the opponent [to earn points].”

Having played for more than 10 years, Oh says that he’s still not sick of the sport.

“Depending on how much I concentrate, I either stab or get stabbed,” Oh says. “Once I start concentrating, there’s just no time to get bored.”


Since Oh started the sport in middle school, he’s now competed in hundreds, maybe even thousands, of matches. After competing in that many matches, he doesn’t really get nervous anymore.


Despite fencing being an elite sport in some countries, in Korea, fencing receives little attention except for the Olympics and Asian Games. Despite being the best in the world, the only time Oh has really had a shot at becoming a household name was the 2018 Asian Games.

At the 2018 Asian Games men’s sabre team event, Team Korea managed to pick up gold, but the individual event was bittersweet. After battling their way through the competition, Oh and teammate Gu Bon-gil ended up facing each other in the final. The gold might have been guaranteed for Korea, but the stakes were high for both Gu — seeking to defend his title for a third Games — and Oh — looking for his first individual Asiad gold.

Oh Sang-uk, left, competes against his teammate Gu Bon-gil during the final match of the 2018 Asian Games. [ILGAN SPORTS]

On the piste, they had to approach it like any other competitors. They fought a hard fight, and in the end it was Gu who emerged victorious, defeating Oh 15-14.

Despite Gu defending the title for a third time, he wasn’t able to celebrate as he had just defeated his younger teammate. Once the match was over, Gu was spotted on camera crying because he felt sorry for Oh.


“I was a little disappointed,” Oh says. “At the time, I was a bit of a perfectionist. There was this thought where I have to win points, whoever the opponent is.”

Two years have passed, and now that Oh looks back at it, losing the Asiad final helped him change his perception of the sport.

Although he lost that Asian Games final, Oh still thinks it might be the the most unforgettable tournament in his career. Not only because of the high-profile loss in the individual final, but also because he got to compete in the team event with his role model, Kim Jung-hwan, and won gold.

On the other hand, when asked about the happiest moment of his fencing career, Oh isn't picky. Winning a gold medal — it doesn't matter which one — always makes him happy.


Oh doesn’t have his own mantra. Instead, he enters every match with a head filled with data. As a point can be determined within just a few seconds, Oh says that he’s only focused on trying to protect his strengths.

“I think it’s different in each of the matches,” Oh says. “Everyone has their own strength. But I can’t use the same strategy on a different person. I go into the match thinking about the data for that match. Once the match starts, I think about that a lot.”

Competing in both team and individual events, Oh says that he actually prefers the team event.

“I think the good thing about the individual event is that I can win if I play well and lose when I play badly,” Oh says. “But in terms of the team event, when my teammate isn’t playing well, I have to help them out. When I play badly, other teammates do the same. I think this is teamwork.”

Oh says that makes winning more exciting, because the team has worked together to overcome the challenges they've faced. Maybe thanks to that love of teamwork, Team Korea is also a powerhouse when it comes to the men’s sabre team event. Korea is dominant in terms of points, at 436, a good 106 points ahead of Team Hungary.

Oh also doesn't have any superstitions before he goes into the match. However, there had been some weird superstitions that his teammates have come up with.


“When I start thinking about superstitions, my head starts thinking in that direction,” Oh says. “So since then, I don’t think about superstitions at all. Before, there was one. For example, in team events, there were times when we were about to lose and I got injured, and then we ended up winning. So my teammates said that we win when I bleed.”

Despite wearing thick uniforms and fighting with dull blades, fencers do still take injuries. According to Oh, being stabbed by a blunt sword still hurts, and he often walks away from fights with bruises.

Off the piste, Oh would describe himself as “just a tall man.” As he has a quiet and calm personality, his hobby is playing computer games, especially League of Legends. But in terms of interests, Oh maintains that he is entirely interest free, and spends most of his time not really doing anything. He doesn’t have one, which makes him feel like he’s not doing anything these days.

Outside of the world of sports, Oh doesn't really know where he fits in. If he wasn't a fencer, Oh says, he would have inevitably ended up playing a different sport.

“My middle school coach said this a lot,” Oh says. “That if he didn’t select me, then I would’ve hung out with the bad guys and been in a gang because studying really wasn’t for me.”


Looking at his goals in the short and long term, Oh says he sees his future very clearly.

Like any other athlete that has a chance of competing at the Olympics, Oh dreams of winning gold in both the individual and team event. But in the long term, after he's fenced for years and retired, Oh hopes to open up his own club.

That may still be a long way off — fencers’ careers tend to last longer than in other sports — but Oh is already thinking about retirement. When he retires, Oh says, he just hopes he is remembered.

“Even after I retire from fencing, I want people to say that there was a fencer named Oh Sang-uk,” Oh says. “Now that there’s YouTube, they can watch my clips and [hopefully that can help a new generation of fencers].”