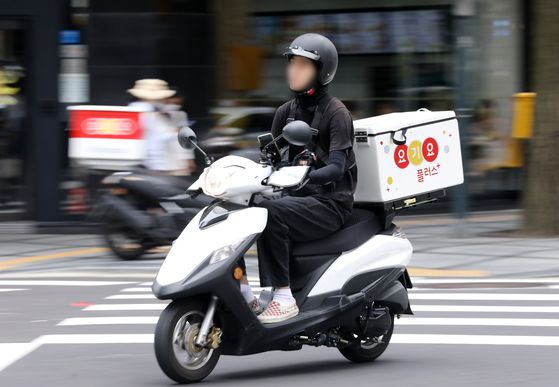 A food delivery in progress in Seoul on June 29. The coronavirus outbreak has driven a rise in online food delivery orders. [NEWS1]


While it's no surprise online food orders have continued to increase as the coronavirus outbreak grinds on, data released Friday by Statistics Korea showed a substantial uptick in online shopping for interior decoration products.


The statistics agency attributed the increase in online shopping to the continuing growth in food delivery, while noting sales increases in air conditioners as temperatures rise.

Food delivery in May rose 77.5 percent on year, reaching 1.32 trillion won, accounting for the lion's share of the increase in online orders.

Online food purchases also grew as consumers shopped online for ingredients or processed food rather than venturing out to grocery stores.

Compared to a year ago, processed food and beverage online purchases went up 33.1 percent. Online purchases of agricultural and livestock products rose 54.3 percent.

The government emergency relief grants distributed beginning in mid-May have played a significant part in the overall increases.

According to a recent report by the Ministry of Interior and Safety, as of June 14 — nearly a month since the government began handing out 14.2 trillion won in emergency grants — 82.4 percent of the 9.62 trillion won that was distributed through credit and debit cards had been spent.

Lower-income households received cash payments, while other grants were delivered in the form of vouchers.

Of the emergency relief grants that were offered via credit and debit cards, 2.19 trillion won, or 25.5 percent, was spent at discount marts and supermarkets.

Restaurant spending, including food delivery, came in second, where 1.93 trillion won was spent, accounting for 24.3 percent.

While the nation’s inflation remained flat in June compared to a year ago, food prices rose on growing demand.


Agricultural and fish product prices rose 4.6 percent on year, more than the 3.1 percent rise in May.

“The government will look closely into meat prices, including beef and pork, which have seen a rise as consumption at home has been rising,” Vice Finance Minister Kim Yong-beom said Friday.

Purchases of computers and related gadgets grew 35 percent on year as consumers continued to work or study at home.

Purchases of books were up 30 percent.

Even purchases of home goods, including toothpaste, went up 38 percent.

Online spending on travel and transportation services declined 61.6 percent compared to a year earlier, which is 894.4 billion won less.

Spending on fashion and cosmetics slowed.

While purchases on clothing were up 8.2 percent, fashion accessories declined 17 percent, while cosmetics slipped by 5.4 percent.

Mobile purchases now account for 68.3 percent of online shopping, an all-time record and a 4.4 percentage-point increase from a year earlier.

Stay in and order takeout