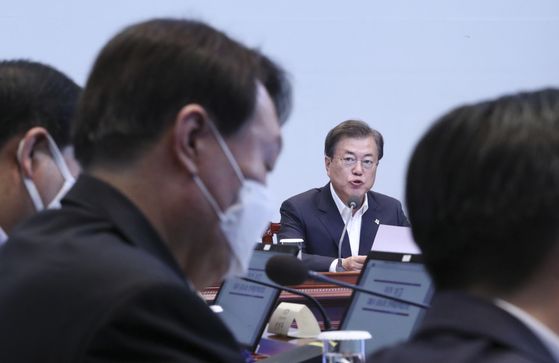 
All eyes are on Prosecutor General Yoon Seok-youl’s next move after he butted heads with his boss, Justice Minister Choo Mi-ae, over an investigation into a high-profile case of collusion between the media and the prosecution.

Battle lines were drawn between Choo, the top champion of President Moon Jae-in's prosecutorial reform campaign, and the state prosecution service after the minister last week issued a rare order calling on Yoon to shut down a review of the validity of an ongoing investigation into a senior prosecutor, Han Dong-hoon, who is a close ally of Yoon’s.

Choo further sidestepped Yoon by granting the probe at the Seoul District Prosecutors’ Office its request to look into Han with greater independence from the prosecutor general — an appeal that Yoon himself denied earlier.

Han is under investigation by the Seoul Central District Prosecutors’ Office for allegedly colluding with Lee Dong-jae, a reporter from Channel A, to blackmail a businessman for incriminating information on Rhyu Si-min, a liberal pundit with close ties to the Moon administration.

On Friday, Yoon summoned senior prosecutors from district and high public prosecutors’ offices across the country to deliberate on Choo’s order and decide whether they represent an overreach of her authority over the prosecutor general, whose independence is technically guaranteed under law.

According to sources present at the meetings, which reportedly ran for over nine hours, a majority of the prosecutors agreed Yoon should acquiesce with Choo’s order to stop the review of the probe, which was due to be conducted by an advisory panel of legal experts appointed by Yoon upon Lee’s request.

Allegations were raised that Yoon attempted to convene that panel in order to effectively block the probe into a close ally, whose alleged conduct itself bolstered arguments that the political neutrality of the state prosecution service is compromised.

But the prosecutors also agreed Yoon should ask Choo to formally reconsider her order granting the Seoul Central District probe greater independence, citing Article 7 Section 2 of the country’s Prosecutors’ Office Act, which states that any prosecutor can ask a superior to reconsider an order if he or she deems it unfair.

Though the matter was not part of the agenda, many prosecutors also expressed their opposition to calls for Yoon’s resignation from office — a move that several lawmakers ruling Democratic Party (DP) have openly demanded. Several participants said Choo had no prerogative to seek Yoon’s resignation, as the power to appoint the top prosecutor is the president's, not the justice minister's.

Such conclusions demonstrated that leading figures in the state prosecution service remain firmly on Yoon’s side, amid the Moon administration’s continuing drive to erode and counterbalance its authority.

Yoon, who was present for the meetings, reportedly did not actively partake in the discussions on Friday, nor did he hint at what his response to Choo’s orders would be.

The top prosecutor was believed to be preparing to deliver his position on the matter on Monday after hearing the opinions of his subordinates at the meeting.

Choo, however, showed no hesitation about making her position on the matter known.

Through a Facebook post on Saturday, Choo called on senior prosecutors across the country to do their part to allow the state prosecution service to “walk the proper path.”

The power of prosecutors “must not be used for political purposes or for personal gain,” Choo wrote. “It is the [justice] minister and prosecutor general’s duty to ensure that suspects are investigated fairly and openly and that investigators conduct their probe according to the law and principles.”