Students and teachers alike struggle with the reopenings 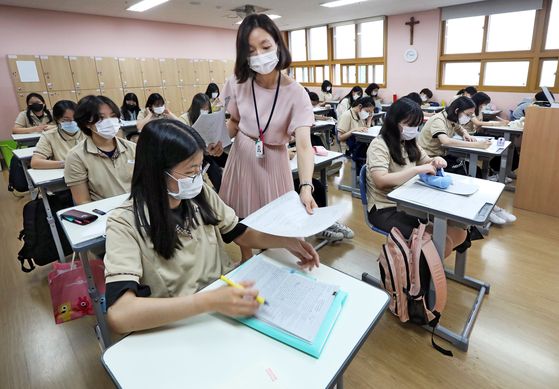 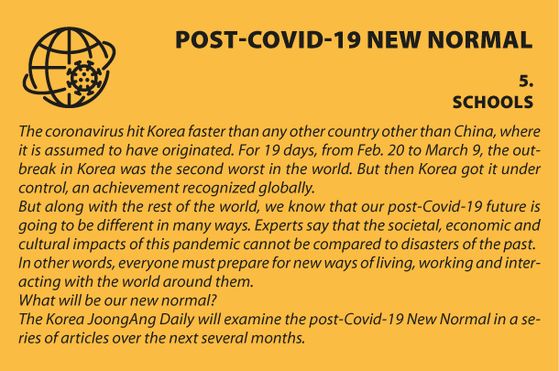 When Korean schools started to reopen in late May, Lee Chae-yeon was ecstatic. Finally, she thought she could say goodbye to the convoluted online learning system and reunite with her classmates after spending months cooped up at home.

But less than five minutes into her first day back at school since the outbreak of the coronavirus, as she was climbing the stairs to reach her classroom on the fourth floor, the 16-year-old realized she could be in for a far more excruciating ordeal: breathing.

“It’s really hard to breathe,” Lee said one recent afternoon at her school’s library, her face half-covered in a white mask. “When I get really uncomfortable, I go to a window, stick my head out and pull down my mask for a breath of air,” she said.

The 11th grader at Bakmun Girls’ High School in Songdo, Incheon, west of Seoul, now goes to school every other week, where she spends 10 hours a day, due to a government guideline requiring high schools in the Seoul metropolitan area to run classrooms at two-thirds of their full capacity.

That means while 12th graders in Seoul, Incheon and Gyeonggi go to school every day of the week to prepare for the College Scholastic Ability Test — the nation’s grueling annual exam for college admissions — 10th and 11th graders take turns, and spend alternate weeks in classrooms and at home taking classes online.

As Korea begins to come to terms with its “new normal” in the post-Covid-19 age, Lee is struggling to adjust to the chaos of juggling e-learning, school and hagwon – or private cram schools, a pillar of the country’s notoriously competitive education system.

“I love coming to school,” Lee said. “I’m very outgoing, so I enjoy meeting my teachers and my friends, goofing around with them one moment and studying the next.”

It’s not as fun at home, Lee said, because “they’re all the same faces.”

Lee is among some 6 million students in Korea’s K-12 educational system who have been back at their schools for about a month now, as the nation took a bold challenge at reopening schools amid a global pandemic that has affected more than 11 million people worldwide, killing over 524,000 of them.

In Korea, about 13,000 people have contracted the disease, some 280 of whom died. Of those infections, patients aged 19 and below account for 7 percent, with zero deaths among that age group, according to data from the Korea Centers for Disease Control and Prevention.

Most Korean students were supposed to start the school year on March 2, but a case in Daegu prevented that from happening, when a worshipper of the Shincheonji Church of Jesus — a cult-like religious group that organized mass gatherings — came down with the disease on Feb. 18. Soon after, the nation saw its number of daily cases surge to three-digit increases, and for several weeks after, Korea recorded the second-highest number of patients in the world after China.

The Ministry of Education announced its first delay of the school year on Feb. 23, and made three similar announcements, pushing that start date back further and further, in the weeks that followed. With each announcement came a stern warning to the public, to cooperate in social distancing to ensure that students could return to their classrooms.

In late March, the ministry announced plans for schools to resume classes, albeit online, triggering a wave of confusion among school districts, teachers, students and their parents, as they all stepped into an unchartered territory caused by a pandemic that was still infecting nearly 100 people a day nationwide.

The online classes kicked off on April 9 in a phased manner, with ninth and 12th graders the first to try out the remote learning system. It fell upon both the schools and government officials to respond to any technical glitches that arose along the way. 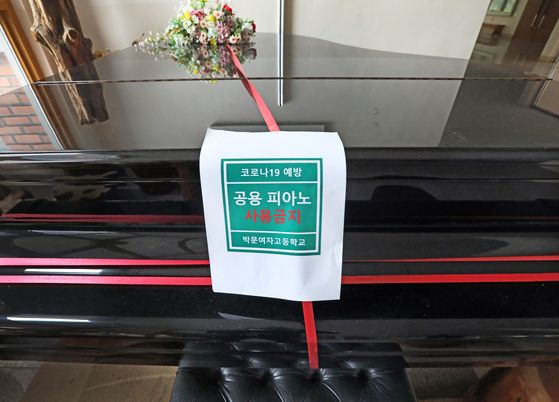 A notice on a communal piano in the school reads that it’s off-limits due to fears of transmitting the coronavirus. [PARK SANG-MOON]

Kindergartners were excluded from the online learning system after education authorities deemed it impossible for such young children to focus on remote classes.

First and second graders were mostly required to attend their classes via television on the EBS channel, under the supervision of their parents or guardians.

On May 20, as the country’s day-to-day infection toll dipped to 20, students were finally allowed to go back to school in a phased manner. Authorities touted the step as a major milestone in Korea’s battle against Covid-19.

Students now start their days by filling out an online self-diagnosis form before they go to school, which asks them if they are displaying any symptoms of the disease and whether they have visited any Covid-19 hot spots. A single tick of any box means they can’t go to school and must stay quarantined at home.

In many cities, students go to school on staggered schedules to minimize physical contact near the front gates, and have their temperatures checked by a thermal imaging camera to screen anyone who records 37.5 degrees Celsius (99.5 Fahrenheit) or higher.

Masks should be worn at all times except during lunch, and desks that used to be placed in pairs are now spaced out. Study rooms have been shut and libraries now have the sole purpose of lending books.

During lunchtime, students are prohibited from chatting and are either separated by plexiglass dividers or have to sit separated far from each other. 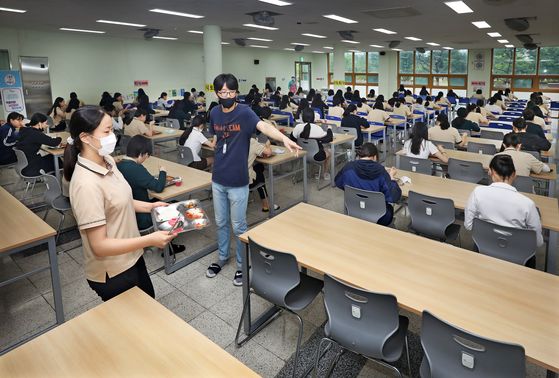 A teacher guides a student to her seat in the school’s cafeteria, where social distancing is practiced. [PARK SANG-MOON]

When a student tests positive or a cluster of infections arise, the school in question as well as schools nearby close their doors again for a couple of days and resort back to e-learning.

While high schools in the Seoul metropolitan area are required to run classrooms at two-thirds of their capacity, kindergartens through middle schools are required to run at one-third, which means more than half of the student body is at home on any given day, engaging in remote learning.

Schools outside the Seoul metropolitan area are normally run at two-thirds of their capacity.

The Education Ministry said the current rotating class system for schools in Seoul, Incheon and Gyeonggi will last until the first semester of the year, and that plans for the fall semester will be outlined at a later date.

“I really miss my friends and teachers, and miss talking with them,” said Shin, 16. “At first, I thought it would be really nice to be alone at home, but I soon came to cherish playing and studying with my friends at school.”

Staying away from school during the pandemic leads her to feel lonely and depressed, she said.

Teachers at her school say they have certainly sensed many changes both inside and outside the classrooms.

The all-girls’ Catholic school has gone to great lengths to prevent any possibility of spreading the virus, even if that means teachers have to work extra hours to monitor students’ health and making sure they abide by rigorous hygiene rules handed down by the Education Ministry in classrooms, halls, the gym, cafeteria, library and other communal spaces.

Students have even been assigned to use different staircases and restrooms in order to offset traffic. Performance-based tests in music and art have been swapped with theory-based tests or exams that don’t require the use of shared equipment.

A music teacher at the school said she ditched all singing and instrument lessons, and that her students were now mostly watching videos about music history during class. Instead of playing football and handball like before the outbreak, the school’s physical education teacher said his students now play badminton and football penalty shootout games. 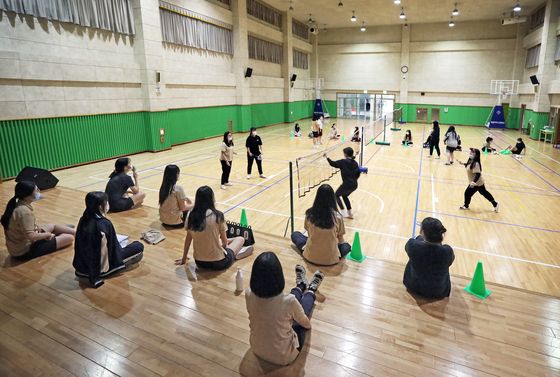 A positive about prerecording her lectures and uploading them online, said Choi So-young, who teaches English, is that she can go through her materials as quickly as she wants.

The downside, however, is far too critical to ignore: She can’t tell whether her students are keeping up.

“It’s hard to know whether they really understand the classes,” said Choi. “When they take written tests, they get many questions based off the online courses wrong, which seems to show they aren’t paying attention.”

Kim Yu-na, another English teacher at the school, agreed.

“My students usually tell me they prefer coming to school because they can concentrate better here,” said Kim. “I think they feel peer pressure when they’re with their classmates, learning and cooperating together, rather than sitting by themselves at home, where it’s hard to focus.”

When it comes to online learning, another difficulty Kim has noticed lately is that her students struggle to ask questions remotely.

“Sometimes, even they don’t know what they don’t understand,” said Kim. “It’s easier for them to just talk to their teachers in person.”

Kim said she thinks reopening schools in the pandemic comes down to learning about self-control and wisely adapting to the changing environment.

“My students seem to have a hard time waking up in the morning because they come to school every other week, and when they’re not in school, they’re at home taking online courses which aren’t even held in real time,” said Kim.

“It’s becoming more and more important for students to learn about self-discipline and how to schedule their time.” 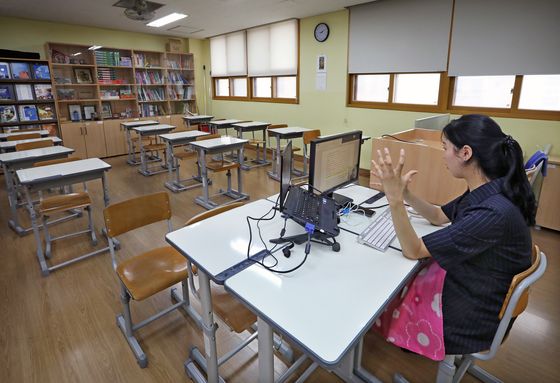 An English teacher prerecords her lesson in an empty classroom to upload online. [PARK SANG-MOON]

Kim Woo-sun Sister Mary Philia, the principal of Bakmun Girls’ High School, said she was particularly worried teachers would have a tough time bonding with their students due to the disrupted classes.

Luckily, she said, her students have been cooperative with the school and teachers have been more than willing to adapt to the frequently changing guidelines from the government.

With about a month and a half left until the first Covid-19 semester ends, Sister Mary Philia said she and her teachers are now preparing for a possible bigger, second wave in the fall.

“We’re all learning and growing,” she said.

As for Shin, the despondent 11th grader, she just can’t wait for it to be all over.

“I just want to go back to my normal life,” she said. “I’m so worried about college admissions.”