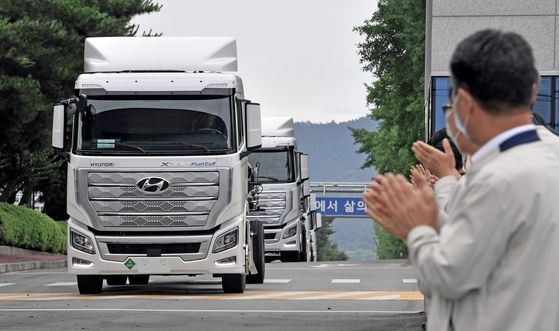 The automaker said it shipped 10 units of the Xcient Fuel Cell, the world’s first mass-produced heavy-duty trucks powered by hydrogen, to Switzerland on Monday with the goal of exporting 40 more by the end of this year.

Hyundai Motor hopes to expand exports of the eco-friendly trucks to 1,600 through 2025.

Until now, trucks running on fuel-cell batteries have only existed as prototypes or concept cars.

“Hyundai Motor will take a lead role in shaping the industry of eco-friendly commercial vehicles not only in Europe but also in North America and China.”

Hydrogen economy is a new buzzword referring to a future in which hydrogen, a zero-emission energy source, is produced at a low cost and used for mobility, heating and other purposes.


Executive Vice Chairman Chung has been especially keen on developing hydrogen power, pledging to make 500,000 FCEVs, including both passenger cars and heavier trucks, by 2030. He is co-chair of an industry lobbying group called the Hydrogen Council, which counts more than 80 global companies as members.

The first batch of 10 Xcient Fuel Cells will be shipped to Hyundai Hydrogen Mobility, a joint venture established last year between Hyundai Motor and Switzerland-based company H2 Energy. The joint venture will convert the vehicles into refrigerated trucks to be used by food retailers.


To expand the feasibility of hydrogen vehicles, lowering their costs is essential.

Hyundai Motor said it will offer the first trucks on what’s called a pay-per-use system, in which customers only pay to use them rather than buying them.


“The only thing the clients need to do is hire a truck driver,” Hyundai Motor said.

“Lowering the cost and psychological barriers in implementing hydrogen-powered trucks will contribute to expanding the industry,” the company said.

The Xcient Fuel Cell is a 34-ton cargo truck powered by a 190-kilowatt hydrogen fuel-cell system. It can drive up to 400 kilometers (250 miles) on a single charge, which takes eight to 20 minutes to complete.

But Hyundai Motor's Euisun Chung has made them a priority and pinpointed the logistics industry, which usually has preset routes which makes charging infrastructure easier to set up. Hyundai Motor has a second hydrogen truck model coming up based on its concept car, HDC-6 Neptune, which will be able to travel 1,000 kilometers per charge.

Global consulting firm McKinsey projected that a total of 3 million to 4 million units of hydrogen-powered trucks could be distributed worldwide by 2030 in a 2018 report.