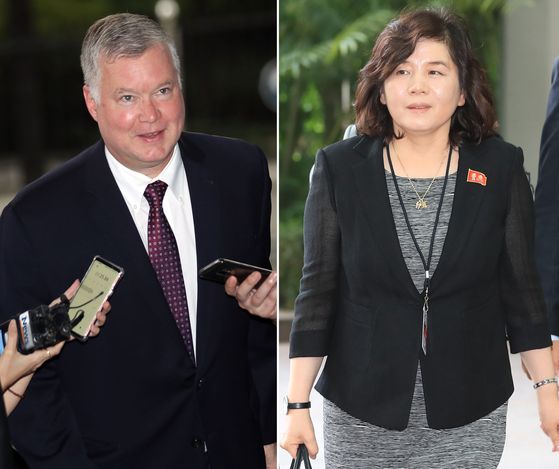 Stephen Biegun, the U.S. deputy secretary of state and special representative for North Korea, left, is set to kick off his first trip to Seoul this week, in a photo from September 2018. North Korea's First Vice Foreign Minister Choe Son-hui, right, on Saturday issued a statement refusing talks with Washington is pictured in a photo from 2018. [YONHAP]


Stephen Biegun, the U.S. deputy secretary of state and special representative for North Korea, will make his first trip to Seoul this year on Tuesday to discuss Pyongyang issues amid a continued standstill in denuclearization negotiations, according to diplomatic sources.

Biegun’s three-day visit to Seoul is expected to include talks with South Korean foreign affairs and security officials.


Biegun is expected to arrive on a military plane at the Osan Air Base in Gyeonggi — his first visit to Korea in seven months.

Biegun’s latest visit follows a reshuffling last week of South Korea’s top foreign affairs and security officials, including the appointment of Suh Hoon as the National Security Office director, Park Jie-won as head of the National Intelligence Service (NIS) and Lee In-young as the new unification minister. The shakeup came as the Moon Jae-in administration pursues a breakthrough in its dialogue with the North.

During his visit, Biegun is expected to focus on preventing further provocations by North Korea. Tensions on the peninsula escalated in June after Pyongyang demolished the inter-Korean liaison office in Kaesong. But in the past two weeks, North Korea has especially refrained from using provocative language toward the South, after leader Kim Jong-un ordered a halt to military actions.

Biegun is also expected to reunite with Lee Do-hoon, South Korea’s special representative for Korean Peninsula peace and security affairs, and to pay a visit to the Blue House and meet with Suh Hoon, a North Korea expert who replaced Chung Eui-yong.

As national security adviser, Chung had previously taken the helm on diplomatic overtures with Pyongyang, often playing a liaison role with Washington. Last week, he was appointed as a special presidential adviser.

Lee Do-hoon last visited Washington from June 17 to 19. Biegun and Lee have headed the working group talks between Seoul and Washington to coordinate policy on North Korean denuclearization, sanctions enforcement and inter-Korean cooperation. Pyongyang has criticized the bilateral working group for impeding upon inter-Korean cooperation initiatives.

Biegun’s visit also led to speculation about whether he will contact the North or meet with Pyongyang officials at the inter-Korean truce village of Panmunjom during his Seoul visit.

Choe Son-hui, the North’s first vice foreign minister, in a statement carried by state media Saturday said she doesn’t “feel the need” for face-to-face talks with the United States so long as Washington sees it as a “tool for grappling with its political crisis.”

Analysts have floated the possibility of a third North-U.S. summit in October, ahead of the U.S. presidential elections. Biegun in an online forum on June 29 said that a summit before the November elections, dubbed in the media as an “October surprise,” is “unlikely” under current circumstances, amid the coronavirus pandemic.

But Biegun, who has pushed for a flexible approach regarding the North, also stressed that progress can be made “very quickly” should Pyongyang return to talks.

Choe addressed in her statement the “rumors” of a North-U.S. summit before the U.S. presidential election and even used the term “October surprise.”

Experts construed Choe’s remarks as an indicator that Pyongyang may be expecting Washington to bring something new to the table.

Choe has unofficially been considered Biegun’s counterpart since the start of the denuclearization negotiations. Biegun, a former Ford executive, was appointed as U.S. special representative for North Korea in August 2018 and was promoted to deputy secretary of state last December.

Pyongyang and Washington struggled to close gaps on the scope of denuclearization needed for some sanctions relief in the collapsed second summit between North Korean leader Kim Jong-un and U.S. President Donald Trump in February 2019. Kim and Trump reunited for a spontaneous meeting at the demilitarized zone in June that year. Biegun last held working-level talks with North Korean officials in Stockholm, Sweden, in early October.

Biegun last visited Seoul in December 2019 but was not able to meet with Pyongyang officials then.

Biegun is expected to be accompanied by a U.S. delegation including Allison Hooker, the White House National Security Council's senior director for Asian affairs. They are expected to make a stop in Tokyo later this week.