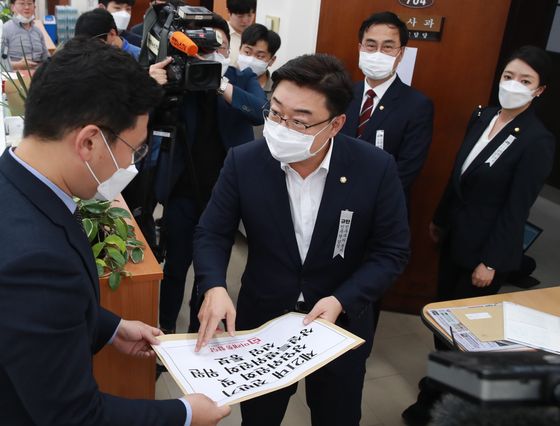 United Future Party Rep. Kim Sung-won, second from left, submits the party's assignments of lawmakers to standing committees at the National Assembly on Monday. The main opposition party ended its three-week boycott of the legislature. [YONHAP]


The National Assembly started an extraordinary session Monday to discuss a series of contentious bills and hold confirmation hearings of top officials after the main opposition party ended a boycott of three weeks.

The July session started at 2 p.m. Monday. The ruling Democratic Party (DP) is eager to pass bills, including one that changes the way the legislature operates, despite expected resistance by the main opposition United Future Party (UFP).

Last week, the DP revealed some details of the bill to change the law governing the National Assembly’s operation. It is intended to keep the legislature open year-round except for annual recesses from July 15 to Aug. 15 and Dec. 11 till Dec. 31.

According to the bill, two plenary sessions will take place every month, and bills will be put to votes on a first-come-first-served basis. The yearly parliamentary audit of the government must end before the September session, it said.

The UFP, which returned to the legislature on Monday after a three-week boycott, called the bill a “shortcut to a dictatorship.”

“This is a bill intended to incapacitate the National Assembly and the opposition parties,” Rep. Joo Ho-young, UFP floor leader, said Monday.

“If the majority party unilaterally opens a session and passes any bill using its majority, the existence of the opposition will be denied,” he said. “They have already been doing all they wanted to do, and they are now blatantly pushing forward this bill, seeking a shortcut to a dictatorship. We will do our best to stop it at the House Steering Committee.”

Joo admitted that the UFP helplessly watched the ruling party’s wielding of its majority for the past weeks, but decided to return to the legislature to put up a fight.

The UFP on Monday submitted its assignments of lawmakers to standing committees. During its boycott, National Assembly speaker Park Byeong-seug used his power to assign UFP lawmakers to start the operation of the legislature.

As of Monday, the DP controls 176 seats in the 300-member legislature, while the UFP controls 103. The DP’s majority is enough to open a voting session alone and pass almost any bills except for a constitutional amendment.

The DP and the UFP are expected to clash over the scheduled launch of a new investigation agency for senior public servants. The DP has vowed to open the Corruption Investigation Office for High-Ranking Officials [CIO] on July 15 as scheduled, despite the UFP’s protests.

At the end of last year, the DP and its allies rammed through a series of bills to create the CIO, making it the first state organization permitted to take over some powers of the prosecution.

President Moon Jae-in has repeatedly stressed the importance of launching the CIO. Earlier this month, Moon sent an official letter to National Assembly Speaker Park to start the process of recommending candidates to head the CIO.

He made another push on Monday. During opening remarks at a senior secretariat meeting in the afternoon, Moon said lawmakers must act quickly.

According to the law governing the CIO, a seven-member candidate nomination committee, including two opposition lawmakers, must recommend two candidates for the president to choose from. Becoming a candidate requires six out of seven votes, effectively giving the UFP veto power.

The DP is pressuring the UFP to form the nomination committee as soon as possible. If the UFP does not cooperate, the DP said it will revise the law governing the CIO in order to take away the UFP’s veto power.

The UFP said the legislature must wait for a Constitutional Court ruling on the legitimacy of the CIO. In May, the party filed a petition with the court challenging the CIO’s constitutionality.

Because impeaching a cabinet minister requires a majority vote, the UFP’s threats are not considered serious.

The UFP also warned that confirmation hearings for Moon’s top nominees won’t be easy. DP Rep. Lee In-young was nominated last week as unification minister and former lawmaker Park Jie-won was named director of the National Intelligence Service (NIS), and they will have to undergo nonbinding confirmation hearings.

The UFP’s cooperation is crucial to hold the confirmation hearing for Park, in particular.

Although the DP used its majority to form 17 out of 18 standing committees and elected its lawmakers as chairs, the National Intelligence Committee, which is in charge of Park’s confirmation hearing, has not been formed due to the UFP’s boycott. Unlike other standing committees, the law requires an agreement between the DP and the UFP to nominate a candidate for the National Intelligence Committee chair.

“We must start working,” DP Chairman Lee Hae-chan said Monday. “To this end, the confirmation hearings must take place as soon as possible. We ask for the opposition’s cooperation.”

Moon also said Monday that the government is seeking the legislature’s cooperation to approve more antispeculation measures in real estate, calling them the “most urgent issue” for the public.