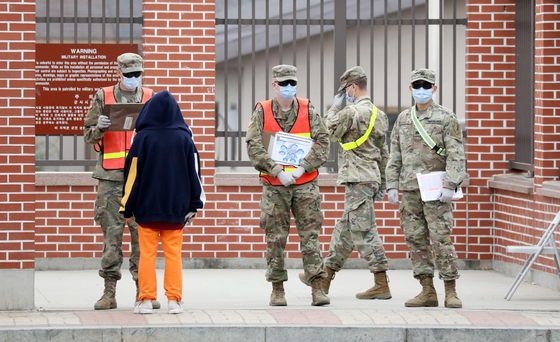 
Five people affiliated with the U.S. Forces Korea (USFK) tested positive for Covid-19 late last week and over the weekend.

Two dependents of USFK service members flew into Incheon International Airport on June 21 from Europe and were transported to Camp Humphreys, where they were tested. Their test results were negative, but they were still kept quarantined for two weeks. Near the end of their quarantine period, they were tested once more and were found to be infected.

One newly assigned service member of the USFK, who arrived at Osan Air Base on July 1 on a U.S. government-chartered flight from Japan, tested positive for Covid-19 upon arrival, according to the USFK.

The fourth individual was a USFK contractor, who flew into Incheon airport from the United States on July 2. He tested positive on his first mandatory Covid-19 test.

The fifth individual was a member of the USFK returning from a trip to the United States. He tested positive after arriving at Incheon airport on July 3.

“Since testing positive, all five individuals have been moved to Camp Humphreys’ isolation barracks designated for confirmed Covid-19 cases,” USFK said in its statement on Friday. “USFK health professionals determined there was limited contact […] due to the service members and all others on the commercial and chartered flight being tested and immediately quarantined; thorough cleaning of Camp Humphreys’ quarantine rooms has been completed.”

A member of USFK also made headlines over the weekend for partying with other Americans on Haeundae Beach in Busan on July 4, American Independence Day.

“I am at Haeundae Beach right now and some 80 percent of the people in front of me are foreigners,” wrote a Korean user of Twitter on July 4. “And I see almost none with masks on.”

Some locals on the beach reported to police a group of foreigners who allegedly threw fireworks in the direction of crowds and restaurants nearby.

Busan police apprehended a USFK member in his 20s on the beach and asked the rest of the foreigners lighting off fireworks to go home. 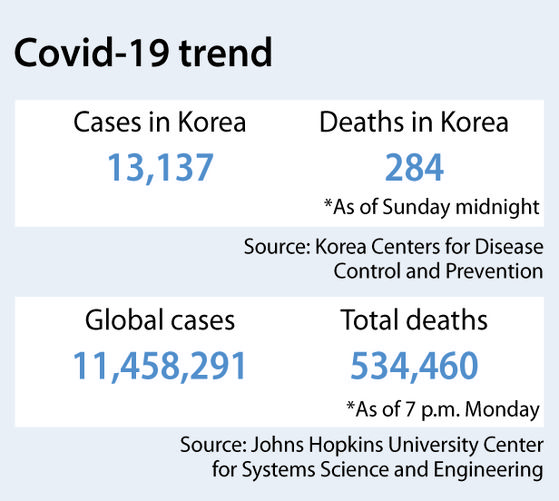 “There was some trouble reported due to the fireworks but no casualties,” a police officer told the JoongAng Ilbo on Saturday.


The Korea Centers for Disease Control and Prevention (KCDC) said 48 cases were recorded in Korea by midnight Sunday, with half of the cases imported.


Most of the cases were in the Seoul, Gwangju and Daejeon areas due to clusters in those cities.

One additional member of the Wangsung Church in Seoul tested positive by noon on Monday, bringing the total number of infected members in that church cluster to 36.

Seven additional members of a church in Suwon, Gyeonggi, tested positive by noon on Monday, bringing the total traced to the group to 20.

Seven additional people with ties to the Gwangreuk Temple in Gwangju tested positive by noon on Monday, bringing the total number of infections in that cluster to 87.

The additional cases on Monday represented a drop after Korea saw over 60 new cases daily for three days in a row: Friday, Saturday and Sunday.

Meanwhile, the National Assembly announced that it is publishing a special report on Tuesday that will call for a more detailed analysis on how the Covid-19 pandemic may be affecting women, especially in health care services.

“When it comes to caretakers in hospitals, the ratio of women to men is quite unbalanced,” said Jeon Yoon-seong, a researcher for the National Assembly Research Service. “Because there are more women in this field, they are more exposed to the risks of the pandemic. The report will call for closer studies into how much more vulnerable women may be to the pandemic in Korea and what measures should be implemented to protect them.”

Rowdy Americans on July 4th cause trouble in Busan