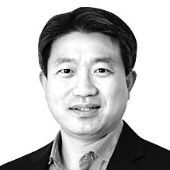 Kim Seung-hyun
The author is the editor of political news at the JoongAng Ilbo.


I recently lost the most avid reader of my writings. My father passed away last month. He used to call me every time my column was published and sympathized with the efforts I had to put into each column, even worrying that I’d make enemies after publishing certain pieces. The newspaper with my column still lies open on the table in the living room with sentences underlined in some areas.

When he picked me up after late-hour study sessions when I was a student, he used to look at the dark sky and say, “It ain’t always a moon night.” He must have meant that the moon is not clearly visible every night.

He must have heard it from his father. My grandfather is said to have been very diligent. He had built his own house by grinding mill. Never stern with his children, he often offered wisdom and referred to the moon night to advise his son that some nights could be dead dark.

Those were days when electricity was rare. Vision at night depended on moonlight. But the maxim underscores human vulnerability and reliance at the mercy of Mother Nature as a full moon — or fortune —does not last long.

My sentimentalism was augmented by a sudden humbling by Rep. Lee Hae-chan, chairman of the ruling Democratic Party (DP). After President Moon Jae-in’s approval rating sank to below 50 percent, Lee apologized for “upsetting the people because of the instability in the housing market. The “moonlight” effect had begun to wane.

The “Moon-setting” has been brought about by the ruling party. After winning a 176-seat supermajority in the 300-member National Assembly in the April 15 parliamentary elections, the DP and government have lost self-control. With their contradictions — and stubborn self-righteousness — amplified, their poor reasoning and flaws were bared after the moonlight effect was removed.

Six months have passed since the government enforced heavy regulations on multiple home owners and vowed the presidential staff would be first to sell their extra homes. But many of them still retained two or more. Moon’s Chief of Staff Noh Young-min pressed others to sell their extra properties, but he himself held onto one expensive apartment in Gangnam, southern Seoul. The people never asked public officials to sell their properties and only made themselves a public mockery by pulling off a farce. The Blue House hardly would remember its early slogan. It had promised to be “strict on itself and generous to others.”

The DP broke the long-cherished tradition of yielding the chairmanship of the National Assembly’s Legislation and Judiciary Committee to the opposition for balance in lawmaking, and obtained the seat to ensure “a working legislature.” The ruling party showed how “working” can be by rubber-stamping a mega-sized third supplementary budget bill in just 25 minutes. A DP lawmaker, who used to be outspoken as a prosecutor, was punished for voting across party lines. A party’s ban on the individual’s voice is violation of the Constitution. The principles of democracy have been bent for party interests.

Despite the complexities behind the freedom of expression and human rights issues, the ruling front is out to outlaw the dispatch of propaganda leaflets by North Korean defectors across the border after their activities angered North Korea.

A DP lawmaker called those defectors, who are now legally South Korean citizens, as betrayers to their mother country.

The party is attempting to “rule above the law” instead of respecting “rule of law,” showing symptoms of lunacy that can be compared to enforcing lockouts on people with different ideas as one would quarantine virus spreaders.

Standing above the law

Standing above the law (KOR)