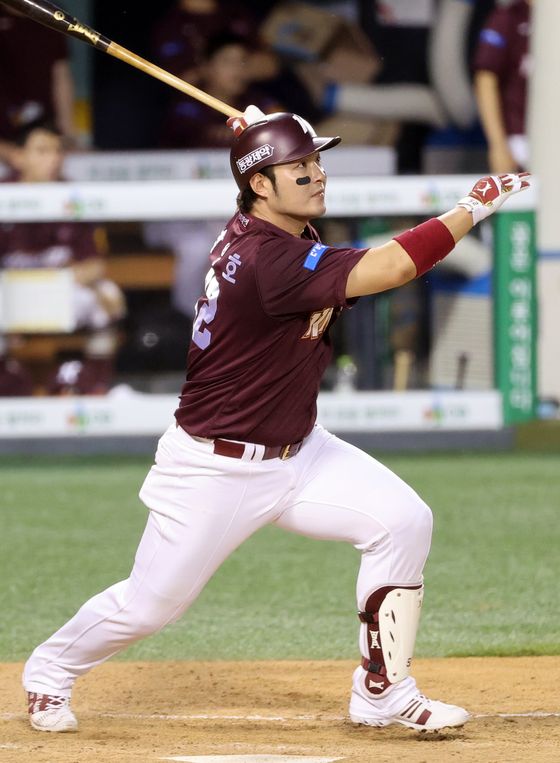 Over the weekend, Park Byung-ho of the Kiwoom Heroes became only the 14th player in the KBO to hit a 300th career home run. [YONHAP]


None of the 10 KBO clubs managed to sweep their weekend series, but Kiwoom Heroes’ slugger Park Byung-ho did manage to set a new KBO record.

By hitting a home run against the KT Wiz on Sunday, Park recorded his 300th career homer. Although there's a long list of KBO sluggers who have made it to the big 300, Park has managed the feat in a record low number of at-bats.


Park is the 14th slugger to hit 300 home runs, and he does so in 3,755 at-bats. Before Park, Lee Seung-yuop, formerly of the Samsung Lions, held the record, having the triple century with 4,691 at-bats. Park beats Lee's record by more than 900 at-bats, although it took him a lot longer to get there. Lee set the old record aged 26, while Park breaks it at 33. 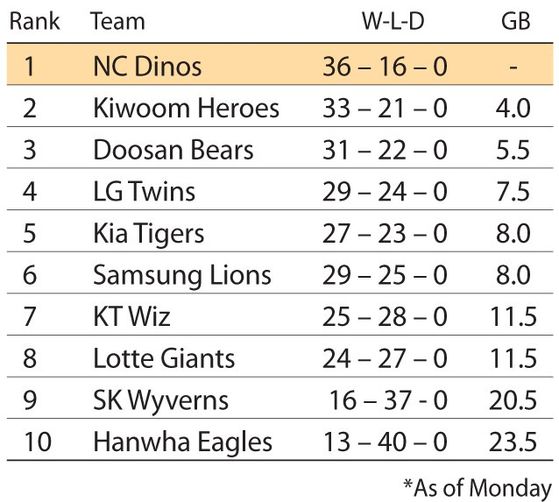 Despite Park’s personal achievement, the Heroes still suffered a 5-10 loss, and went on to lose their series against the Wiz as they only picked up one win on Saturday. The Seoul team is still in second place, with 33 wins and 21 losses, four games behind the NC Dinos.

Park's late success is in part because he missed two seasons in the KBO — 2016 and 2017 — as he headed to the major league to play for the Minnesota Twins.


Having made his KBO debut with the LG Twins in 2005, Park spent a lot of his first four seasons on the bench. It wasn't until he joined the Nexen Heroes, now the Kiwoom Heroes, in 2011 that he started to make a name for himself as a slugger with potential.


Elsewhere in the league, the Kia Tigers suffered some unfortunate news over the weekend. Tigers infielder Kim Sun-bin is expected to miss about three weeks of the season due to a leg injury. Kim’s absence is expected to be crucial to the Tigers, as he currently leads the KBO in batting average at 0.378 as of Sunday’s game.

The Tigers are barely holding on to fifth, the last postseason spot, with 27 wins and 23 losses. The Tigers and the sixth-ranked Samsung Lions currently don’t have any game differences, but the Tigers are slightly ahead in winning percentage, at 0.540.

Making matters worse, the Tigers’ ace pitcher Yang Hyeon-jong isn't having a good season. After starting in 11 games, Yang has a 5.55 ERA with five wins and five losses. Last season, Yang started off the season terribly and quickly picked up the pace. This year he’s struggling to find a stable approach.

Along with Yang, the majority of the KBO’s best pitchers from last season seem to be struggling this year. Lee Young-ha of the Doosan Bears had the best season of his career in 2019, picking up 17 wins and only four losses with a 3.64 ERA while starting in 29 games to help his club to the Korean Series title. This year has been a completely different story.

Throughout his 10 starts this season, Lee has picked up only two wins and four losses with a 5.76 ERA.

Looking at the pitching ranking, Eric Jokisch of the Heroes leads in ERA at 1.30 while Raul Alcantara of the Bears, Jokisch and Koo Chang-mo and Drew Rucinski of the Dinos are tied for the most wins, at seven each. In terms of strikeouts, Koo stands out at 76.

The Wiz, on the other hand, managed to move up a spot to seventh, winning their series against the Heroes 2-1. By doing so, the Lotte Giants moved down a spot to eighth, but both the Giants are the Wiz have the same game difference, at 11.5 games. The Giants lost their weekend series to the ninth-ranked SK Wyverns.

The Bears are in third and only 0.5 games behind the Heroes after winning their weekend series against the Hanwha Eagles 2-1.

The KBO will continue its season on Tuesday. The next Jamsil derby will see the Twins and the Bears face off, while the Dinos will play the Wyverns in Incheon at Munhak Baseball Stadium. In Gwangju, the Tigers will host the Wiz, while the Heroes will play their three-game series against the Lions at Gocheok Sky Dome. The Giants will be heading over to Daejeon to play their three-game series against the Eagles.