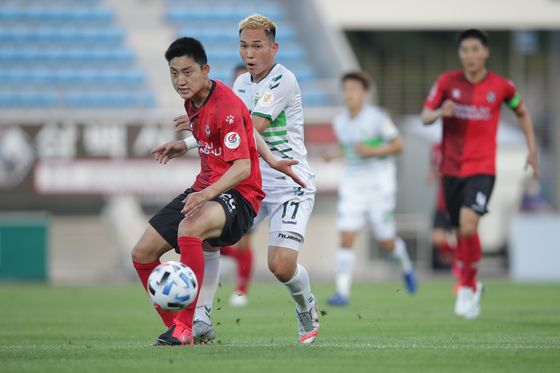 Jeonbuk Hyundai Motors saw its lead at the top of the K League 1 table shrink to just one point over the weekend, following a combination of a rare loss and a victory by its biggest rival club.

Jeonbuk fell to Sangju Sangmu 1-0 on Sunday, with Kang Sang-woo converting a 75th-minute penalty to hand Jeonbuk only its second loss of the season. It was Jeonbuk's first "L" since May 30, when it dropped to Gangwon FC, also by the score of 1-0, and remained at 24 points.

A day earlier, second-place Ulsan Hyundai FC routed last-place Incheon United 4-1 behind Junior Negrao's hat trick, moving to 23 points, just one behind Jeonbuk. Ulsan had fallen back by four points after losing to Jeonbuk on June 28 but bounced right back to keep the title race interesting.

Ulsan was largely expected to defeat Incheon, which still has not won a match this season. That meant Jeonbuk had to beat Sangju to stay four points ahead, and it was the favorites, having won its last five matches and not having lost to Sangju since September 2017.

But Sangju, a team made up of conscripted players serving their mandatory military duty, had won three straight matches of its own before Sunday, and caught some lucky breaks to pull out the victory.

Sangju dodged a bullet early in the second half, when Lee Dong-gook rang his penalty off the crossbar and Han Kyo-won missed the net on a rebound.

Kang converted his in the 75th, after getting tripped up by Hong Jeong-ho inside the box. An offside call wiped out a Jeonbuk goal by Cho Gue-sung in the 81st, and Sangju held on for its fourth consecutive 1-0 victory.

Sangju, the biggest overachievers in the league this season, remained in third place with 20 points, one ahead of Daegu FC and Pohang Steelers.
Both Daegu and Pohang enjoyed huge wins on Sunday to keep pace.

Pohang pounded Seongnam FC 4-0, led by Song Min-kyu's brace. Seongnam, who opened the season on a four-match undefeated run, has not won since May 31 and nose-dived to 11th on the table.

Daegu defeated Gwangju FC 4-2, with Gwangju's 1-0 lead disappearing on the vapor trails of three unanswered Daegu goals in a five-minute span early in the second half. Dejan Damjanovic had two of those three goals.

On Saturday, FC Seoul and Suwon Samsung Bluewings ended in a 3-3 draw in their "Super Match" derby. They remained in ninth and 10th places, with much of the shine gone from their once-popular derby.

Busan IPark quietly jumped to sixth place following a 4-2 victory over Gangwon FC. These two clubs are tied at 11 points, but Busan is ahead in the second tiebreaker, goal difference.

But Busan is eight points back of Pohang for fifth, and only two points better than Seongnam for 11th. With so many clubs bunched up in the lower half of the table, their positions can change in a hurry.

The teams combined for 28 goals over the weekend, a record under the current 12-club format in a single weekend of play.

The previous record had been 26 goals, set in 2016 and matched two years later.

Also, the 17 goals from three matches on Saturday were a season high for one day, surpassing 12 goals from four matches on June 13.