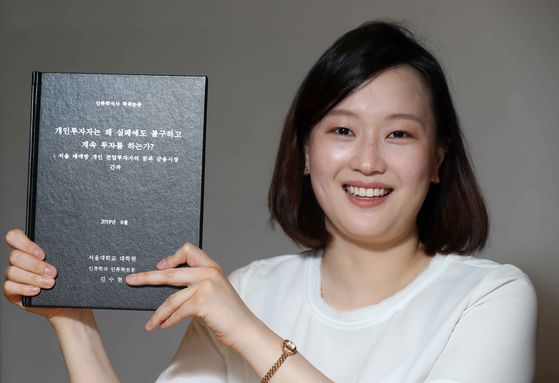 Kim Soo-hyeon, 26, a graduate student of Seoul National University, holds up her thesis at an interview with the JoongAng Ilbo. [KIM SANG-SEON]


"Piling up small gains and losing them all at once!”

“Stocks, the only option for the father who graduated with a liberal arts degree.”

“Entering the stage of jonbeo, holding dropped stocks and standing firm until they go up again.”

These comments are pulled from a master's degree thesis written by Kim Soo-hyeon, a graduate student at Seoul National University’s School of Anthropology, whose research into the thoughts of full-time retail investors has taken the internet by storm.

People shared excerpts from her thesis on social media. Some were interested enough to sit down for hours, read through the 190-page paper and write detailed reviews.

When asked about the attention, she told the JoongAng Ilbo, she’s grateful but also embarrassed at the same time.

“Like any other graduate thesis, I thought my academic advisor and the judges would be the only people reading it. It is my first proper thesis and definitely not perfect, but I am grateful and bewildered by all the attention.”

Kim started to notice her thesis, which was submitted and approved last August, was being talked about by ordinary people on social media a couple of months ago.

“Sometime around May, a close friend told me the image of my thesis cover was shared on a Kakao chat room full of retail investors. Last month, a link to my whole thesis was shared on Twitter. It’s amazing, I am bewildered,” she said.

The thesis is based on three months of observing and interviewing full-time retail investors who punch in daily into so-called trading rooms, shared office space rented by individuals monthly.

Photos of a trading room in Kim's thesis. [SCREEN CAPTURE]


Kim paid a 200,000 won ($170) fee and rented a cubicle from October 2018 through January the following year. To establish rapport with her research subjects, Kim did everything a normal full-time ant investor would do: listening to lectures, stock broadcasts and live-streams and investing money into both local and foreign equities.

“Anthropology is qualitative research where the researcher goes into the community they want to research and describes their culture and habits in detail by engaging in deep conversations and continuous observation,” Kim said.

Kim grew up in a household that believed shares to be the crème de la crème of capitalism. Kim’s older brother is a fund manager. While her father is not a full-time investor, he has always emphasized the importance of investment to attain financial independence. The 26-year-old told the paper she once argued with a professor over whether retail investors can actually make a profit or not.

She wanted to know from participation whether it was "structurally possible" to make money as a retail investor, and "where this obsession and belief in economic success — notwithstanding major losses — stemmed from."

Another thing she noticed was that despite a lot of theories, there were no theories or studies focusing on the individual, or retail investors.

An economic version of pornography for middle-aged men

In Kim’s eyes, the trading room was a place where people are glued to the monitor all day from 9 a.m. until the 3:30 p.m. closing bell, a room packed with retired middle-aged men who dream of a “fair” opportunity to achieve financial freedom.

She described full-time retail investment as “an economic version of pornography” for middle-aged men where the “cons of the office and owning a business” no longer exist.

“As I got into the study, I realized the reality of these full-time retail investors was darker than I thought,” she told the JoongAng Ilbo.

She recalls "Black Thursday," Jan. 2, 2019, when the Kospi index went below the 2000-point mark for the first time in two years, as the most difficult time for the punters.

“After that day, the atmosphere at the trading room went downhill. Those who agreed to do interviews had long faces and turned down my offer. While many of them know it’s important to control their emotions, I realized that experiencing losses inevitably leaves a huge scar in their hearts,” she said.

The biggest challenge for Kim was to develop rapport with tenants who are close to twice her age. Her strategy was to be friendly and as noticeable as possible. Kim rented a desk right next to the entrance and smiled to everyone entering the room.

Kim said she noted the different philosophies on financial investment between generations. She recalls one time when she outed her status to a tenant and introduced herself as a researcher. Kim says his tense face changed into a smile of relief.

“Even though they are committed full-time to investing in stocks, they are strongly against young people doing the same thing. They value a hard work ethic and have a negative view of financial investments. To them it is gambling,” she explained.

“This is the opposite of how people in their 20s and 30s think. For younger people, investment is necessary as long as you are on salary. The profit made off of it is a fair result from the effort and studying.”

After finishing her master's in anthropology, Kim transferred to a nursing school and is spending her summer taking undergraduate classes. She says she wants to merge the two fields of studies — nursing and anthropology — and contribute in terms of medical anthropology.

As to whether she is personally making any financial investments, Kim said she is in the market in a limited way.

“I gave birth to my child after finishing the thesis, and after I combined my wallet with my husband's, we are looking into long-term investments and purchasing a house. For us, finding a job with a bigger salary seems to be our immediate goal for now.”