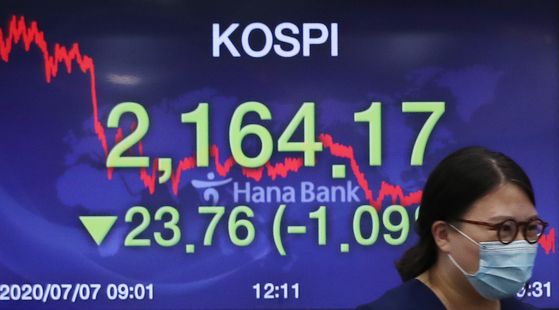 A screen shows the closing stats for the Kospi in a trading room at Hana Bank in Jung District, central Seoul, Tuesday. [YONHAP]


Stocks fell by more than 1 percent Tuesday amid growing fears over the resurgence of the new coronavirus at home and overseas. The won rose against the dollar.

The index erased earlier gains amid concerns over the rising Covid-19 infections, despite economic recovery hopes.

Korea added 44 new coronavirus infections Tuesday, marking a slight decrease from 48 cases on Monday and 61 on Sunday. But health officials warned of a rise in virus infections in metropolitan areas and imported cases.

The local currency closed at 1,195.70 won against the dollar, up 0.10 won from the previous session's close.