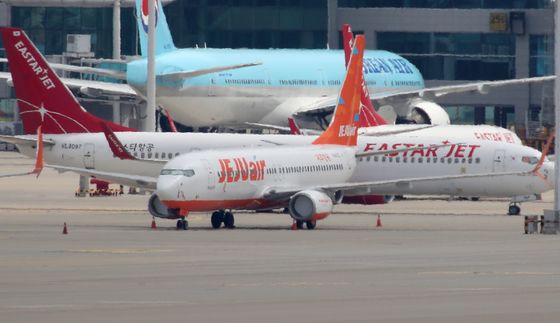 Jeju Air passenger aircraft parked at Incheon International Airport on Tuesday. Jeju Air on Tuesday denied Eastar Jet’s claims that it was behind the restructuring of Eastar Jet. [YONHAP]


Jeju Air expressed frustration with Easter Jet, saying that the acquisition target needs to hold up its side of the bargain and stop leaking details of confidential conversations between the two companies. Eastar's pilots union claims Jeju Air is only trying to walk away from the deal.

“Eastar Jet hasn't demonstrated a sincere attitude toward meeting the obligations and has been busy evading responsibility,” Jeju Air wrote in a statement Tuesday. “It is natural and reasonable not to close the deal in a situation when the conditions are not met by Eastar Jet.”

Jeju Air, 56.94 percent of the company owned by AK Holdings, agreed with Eastar Holdings, which owns 39.6 percent shares in Eastar Jet, to acquire Eastar Jet for 54.5 billion won ($48.7 million) in March. The deal has stalled over disagreements about unpaid wages amid accusations that Jeju Air has been guiding the restructuring of Eastar.

In the statement, Jeju Air said that it was not driving the restructuring of Eastar, contrary to claims made by the labor union, which Monday released records of phone conversations between Eastar Jet CEO Choi Jong-gu and former Jeju Air CEO Lee Seok-joo.

The airline admitted that Lee "advised" Eastar Jet to abandon the operation of domestic routes considering its snowballing debt, but it said Eastar Jet was already planning its restructuring before the acquisition deal was signed on March 9.

“Sensitive topics were to be kept confidential, but phone conversations between the CEOs and minutes of negotiations have been leaked,” wrote Jeju Air in the statement, calling such conduct “immoral.” Jeju Air “feels sorry for the serious damage of the trust that is necessary for the acquisition process.”

The airline said it has met the conditions for the purchase of Eastar Jet, including obtaining a green light from Vietnamese authorities for the business combination on Tuesday, requesting that Eastar Jet meet its side of the deal which include Eastar Jet resolving obligations related to Thai Eastar Jet aircraft leases as well as employees' unpaid wages.

Eastar Jet “claims to resolve unpaid wages through the donation of the Eastar Holdings shares to close the deal,” Jeju Air said. But Jeju Air argues that it holds those shares collaterally and that they cannot be given away.

Jeju Air highlighted the financial weakness of both companies, and said that it must be sure that the target can repay its debts through sound management, “since government aid and mergers and acquisitions are ultimately supported by tax payers."

In the war of words, Eastar Jet’s labor union is fighting back, with Park I-sam, head of the labor union, saying Tuesday Jeju Air “is making an unreasonable demands to kill the deal.”

He added that it was assumed the deal would go through after the "donation" of shares, "but Jeju Air is demanding Eastar Jet resolve all the debt generated after March by July 15."

Eastar Jet has 170 billion won in accounts payable and 26 billion won worth of unpaid wages, according to Jeju Air.