Tesla’s Model 3 electric car topped sales rankings in the domestic electric vehicle (EV) market for the first half of this year.

Released last November, the Model 3 pulled ahead of Hyundai Motor and Kia Motors in the first six months of this year, a particularly notable achievement considering Tesla's factories in America are all closed due to the coronavirus pandemic. Industry experts had initially predicted this year’s Tesla sales to be around 10,000 cars, but judging by the automaker's performance so far, 20,000 seems like a plausible figure.

Tesla sold 6,839 Model 3s during the first half of 2020, based on figures from automobile data analysis firm Car is You and statistics from the Ministry of Land, Infrastructure and Transport. The second highest in sales was the Hyundai Kona, with 4,078 cars, followed by the Hyundai Porter II Electric, at 3,530.

There are several factors that drove Tesla’s sales. First, Tesla's image creates a certain amount of brand loyalty, as it is seen as a revolutionary icon for its innovative autopilot technology and EV platform — Hyundai and Kia both lagged behind in creating their electric vehicles, allowing Tesla to take up a dominant position in the market.

“Tesla's Model 3, which is both refined and cost-effective, far outperforms the rest of the domestic market,” said Kim Pil-soo, a professor at Daelim University College department of automotive engineering. “Once the entry-level price and mass-produced SUV Model Y is released, the number of domestic consumers is going to grow even faster.” 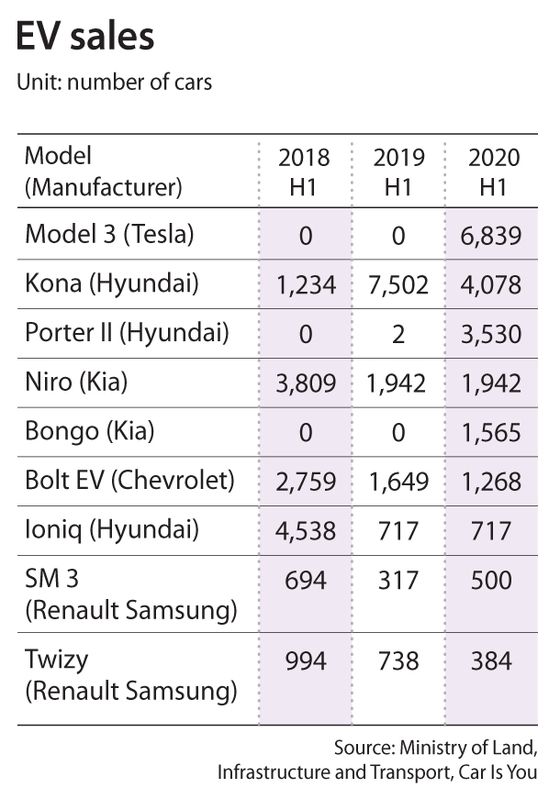 
However, there are some concerns that could put the brakes on Tesla’s sales progress.

“Tesla’s consumers are divided into two groups — those that blindly support the brand and those that are vocal about their complaints,” said Lee Ho-geun, a professor at Daeduk University department of automotive engineering. “As of now, there are more blind supporters than critics, but once Tesla crosses the 10,000 sales mark, the critic group will also grow. Tesla’s biggest risk factor is that autopilot malfunctions can cause harm to other cars in the vicinity.” 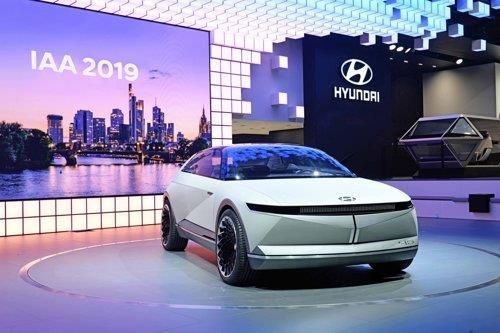 
Over the first half of the year, 22,080 electric vehicles were registered at the Ministry of Land, Infrastructure and Transport, a 27 percent increase from the same period last year, at 17,379 cars. This is double the amount for the first six months of 2018, with 11,852 cars.


The Tesla Model 3’s success has led to a jump in the share of imported EV sales among all EV sales.

In the EV market, 8,745 cars were imported in the first half of 2020, 39.6 percent of the total — an increase from 16.5 percent over the same period last year. When Renault Samsung Motors releases ZOE, the best-selling EV in Europe, this September, imported EV sales are expected to take up a larger portion of total EV sales in the latter half of the year.

Hyundai Motor and Kia Motors are aiming to catch up with Tesla by releasing three new models, dubbed the NE for Hyundai, CV for Kia and JW for Genesis. All three vehicles are crossover utility vehicles (CUV), designed similarly to Renault Samsung’s XM3 released early this year.

“Tesla’s growth this year is largely thanks to the explosion of demand that had been suppressed for a while,” said Kim Jin-woo, analyst at Korea Investment & Securities. “Next year, with new EV releases by global companies, including Hyundai and Kia, a different industry landscape will take form.”