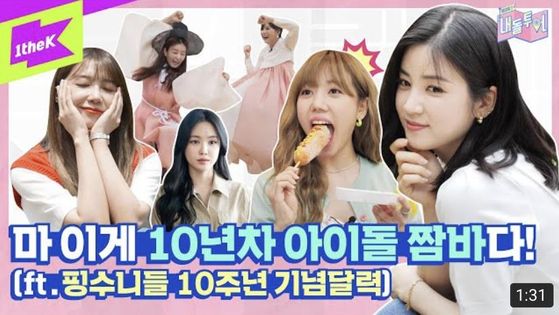 
Girl group Apink will recommend a travel destination in Gyeonggi every week this month, as part of a collaboration with Gyeonggi, Gyeonggi Tourism Organization and content creator Kakao M, the organizations announced on Tuesday.

Content about traveling within the province will be uploaded every Tuesday starting July 7 at 8 p.m. on the YouTube channel of Gyeonggi Tourism Organization, Checkin_Gyeonggi, and on Kakao M's K-pop brand YouTube channel, 1theK.

Apink will take photos at various locations in Gyeonggi for their 2021 calendar that celebrates the group's 10th anniversary of its debut with “Seven Springs of Apink.”

"For those who are tired of the coronavirus, we have planned online travel content that makes it possible for Gyeonggi to be enjoyed at home with Kakao M,” Gyeonggi Tourism Organization said. “We aim to introduce our province to Apink's overseas fans and draw future visits from local fans."